Joe Root ran through the Lancashire batting as his off-spin was telling. 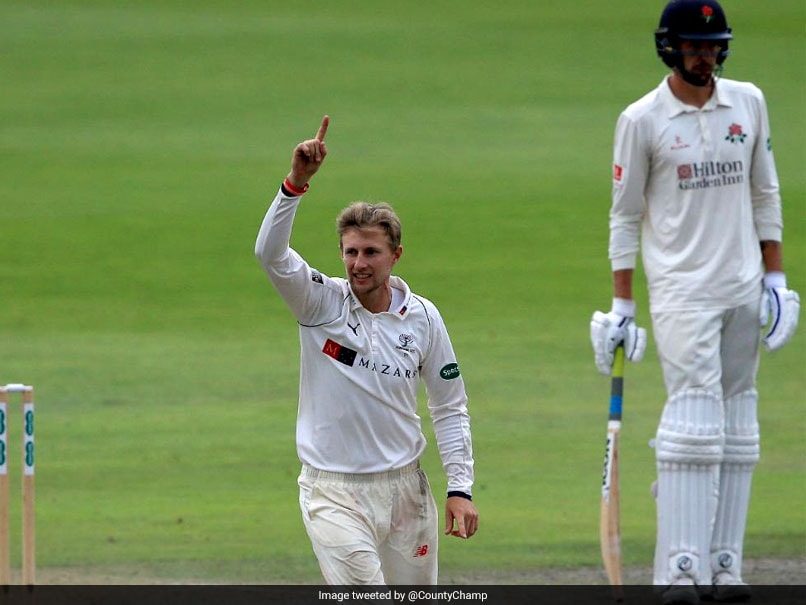 Joe Root finished with remarkable figures of 4-5 from 7.4 overs, including five maidens.© Twitter

England looked all at sea against Kuldeep Yadav in the three-match Twenty20 International (T20I) series and the first two One-day Internationals (ODIs) of the three-match series. Yuzvendra Chahal also caused a lot of problems with the English batsmen failing to come to terms with India's spin twins. Only in the third ODI did England, led by Eoin Morgan and Joe Root, look comfortable against the Indian spinners. But ahead of the five-match Test series that starts on August 1, England seem to have a trump card up their sleeve, if Joe Root's bowling performance in a County Championship match is anything to go by.

The England captain had a dismal outing with the bat for Yorkshire vs Lancashire in the County Championship but more than made up with the ball in hand, helping Yorkshire defeat their arch-rivals by 118 runs at Old Trafford on Tuesday.

In Yorkshire's first innings, Root made 22 before he was the first member of a star-studded hat-trick from Lancashire all-rounder Jordan Clark that also included New Zealand's Kane Williamson and England's Jonny Bairstow.

Root's second innings was even briefer but he at least had the consolation of being caught behind off England spearhead James Anderson for three.

However, Root was a man on a mission with the ball in hand. The part-time off-spinner finished with the remarkable figures of 4-5 from 7.4 overs, including five maidens.

Root, having dismissed England batsman Jos Buttler in the penultimate over of Monday's second day, struck with the first ball of day three when Graham Onions edged behind for a duck.

Soon afterwards, Root had Matthew Parkinson caught at first slip as to leave Lancashire 196 for eight.

He then gained revenge on Anderson by bowling the paceman on his way to a career-best return as Yorkshire wrapped up a resounding victory.

Joe Root England vs India, 2018 Cricket
Get the latest updates on India vs South Africa and check out  Schedule, Results and Live Score. Like us on Facebook or follow us on Twitter for more sports updates. You can also download the NDTV Cricket app for Android or iOS.