Virat Kohli's 149, which will rank amongst one of the finest hundreds by an Indian batsman on English soil, enabled the visitors to reach 274 thereby bringing down the first innings deficit to only 13 runs. 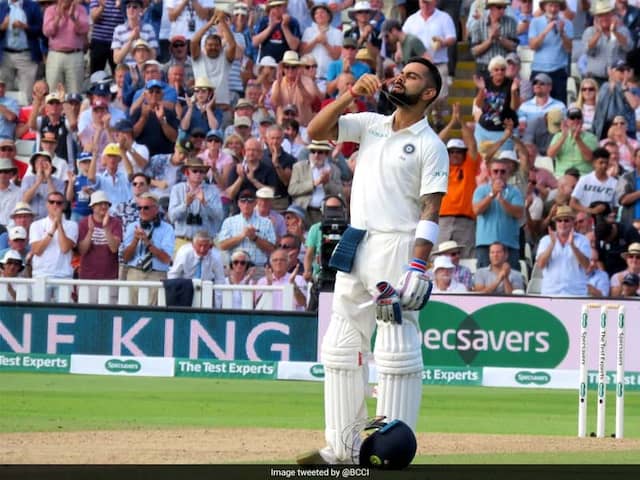 Virat Kohli took a giant stride towards exorcising the ghosts of 2014 with a masterful century as he singlehandedly pulled India out of the woods against England on an eventful second day of the first Test.Kohli's 149, which will rank amongst one of the finest hundreds by an Indian batsman on English soil, enabled the visitors to reach 274 thereby bringing down the first innings deficit to only 13 runs. England had scored 287 in their first essay.At stumps, England were 9 for 1 in their second innings with an overall lead of 22 runs.

The day certainly belonged to Virat Kohli, whose dogged determination for a course correction was evident during an innings where he scored more than fifty percent of his team's runs even as he was booed by England fans for his version of 'mic drop' celebrations on the first day. He got a couple of reprieves early in his innings but his intent to scrap it out under overcast conditions with an incisive Sam Curran (4/74), wily James Anderson (2/41) and relentless Ben Stokes (2/73) asking probing questions, stood out.

His 22nd Test hundred had 22 boundaries and a six and the unbridled joy on competing the coveted hundred was palpable as he let out a wild roar and kissed his wedding ring. He was beaten but he looked unfazed. He covered the swing, the footwork was more assured whenever he met the ball on the frontfoot. Kohli's innings is worth its weight in gold simply because of the situation the team was in.

Dhawan and Murali Vijay (20) did the hardwork of seeing off the new ball with a 50-run stand but it all went awry after that.    Curran used conditions to good effect as he trapped Vijay leg before, got KL Rahul (4) to play a lazy shot and then Dhawan edged one to the slip cordon. Ajinkya Rahane (15) and Dinesh Karthik (0) joined the procession to make it 100 for 5 before Hardik Pandya (22) added 48 with his skipper.

But the most effective support came from NOs 10 and 11. Ishant Sharma (5) added 35 with his skipper running those cheeky singles while Umesh Yadav (1) blocked 15 deliveries only to find his skipper cut loose at the other end. Finally he was the last man out trying to cut Adil Rashid and got a standing ovation from the crowd.

In the morning, Curran had taken three wickets in the space of eight balls to reduce India to 76-3 at lunch. Vijay was solid as usual, leaving the ball well, while Dhawan looked to play down the ground. It helped that Anderson and Broad bowled fuller early in their spells and didn't get the ball to move around as much as the Indian pacers did on day one. Additionally, they looked to rotate strike as much as possible, going for quick singles even if this approach looked dangerous from the outside. It didn't help matters that England lost an early review as Anderson's loud appeal was turned down, with DRS ruling in favour of the umpire's decision.

It was almost an easy-going partnership for the opening duo as they brought up 50 off just 70 balls before the drama began. Curran hit the perfect length as first-change bowler and immediately trapped Vijay lbw in the 14th over. Umpire Aleem Dar turned it down, but DRS overturned the decision as England finally got their breakthrough. It became 54-2 in three balls as number three batsman KL Rahul (4) played a loose shot and diverted a thick inside edge onto his stumps. It brought out Kohli who was booed on his walk to the crease. Curran made it a quick triple blow as Dhawan was caught at second slip in the 16th over.

Things could have been worse as three balls later, Kohli (on 0*) edged Anderson to Jos Buttler at gully with the fielder failing to latch onto a tough chance despite putting in a fine dive. Anderson improved his length and troubled Kohli for the next two overs, before Rashid brought things to a close in this session. This was after India quickly wrapped up the English innings, who lost their last seven wickets for a mere 71 runs.

Lokesh Rahul Sam Curran England vs India, 2018 England vs India, 1st Test Edgbaston, Birmingham
Get the latest Cricket news, check out the India cricket schedule, Cricket live score . Like us on Facebook or follow us on Twitter for more sports updates. You can also download the NDTV Cricket app for Android or iOS.