Virat Kohli rubbed salt into the wound by blowing kisses in the direction of Joe Root. 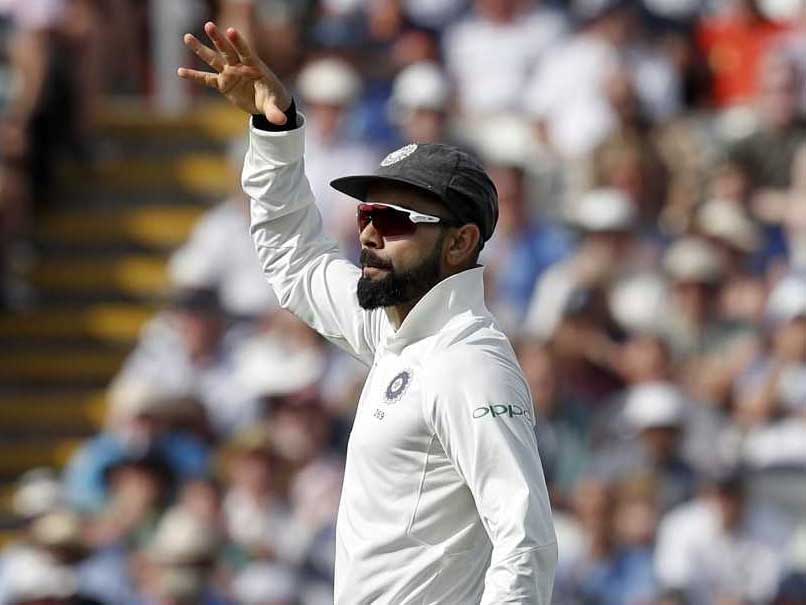 Virat Kohli appeared to utter in Root's direction after the run out.© AFP

England skipper Joe Root took a dig at Virat Kohli after the India skipper mocked his counter-part during the first Test. Kohli replicated Root's mic-drop celebration on Day 1 at the Edgbaston after dismissing Root through a direct hit on Wednesday. However, Root said said the controversial send-off he received from Kohli was "quite funny" and added to the "theatre of the game". England had been well-placed at 216 for three, with Root seemingly on course to score a first Test century since his 136 against the West Indies during last year's day/night clash at Edgbaston. But his 11th Test fifty without a hundred since that innings ended in frustrating fashion when, with Yorkshire team-mate Jonny Bairstow calling him for a tight second run, he was run out for 80 by Kohli's direct hit from mid-wicket.

It was also the finish of a stand worth 104 and the start of a collapse that saw England lose six wickets for 67 runs on the way to a stumps score of 285 for nine.

Kohli rubbed salt into the wound by blowing kisses in the direction of Root and putting his finger to his lips.

He also did the 'mic drop' gesture in imitation of Root's celebration of his one-day series-clinching hundred against India at Headingley.

Meanwhile the words Kohli appeared to utter in Root's direction after the run out could yet lead to action by match referee Jeff Crowe, the former New Zealand captain.

"I didn't see it at the time but I saw it last night," Root told BBC Radio's Test Match Special in an interview broadcast on Thursday.

"It actually adds to the theatre of the game. It's good to have those little moments within things. I thought it was quite funny."

He added: "I'm sure within the five-match series there will be plenty of that stuff going on. It adds to the whole drama of this series."

Asked if Kohli's celebration would fire England up, Root replied: "We'll have to wait and see. I can't see it becoming an issue throughout this game or moving forward.

"But it makes entertaining cricket for everyone to watch, which is exactly what you want in Test cricket."

As for the run-out itself, the England skipper refused to blame Bairstow, saying: "It's no-one's fault in particular.

"You could probably say we were both at fault. There's no hard feelings between me and Jonny."

England's first innings lasted just 10 balls into Thursday's second day, with the hosts adding a mere two runs before they were dismissed for 287 in what is their 1,000th Test.

Joe Root England vs India, 2018 Cricket
Get the latest updates on Fifa Worldcup 2022 and check out  Fifa World Cup Schedule, Stats and Live Cricket Score. Like us on Facebook or follow us on Twitter for more sports updates. You can also download the NDTV Cricket app for Android or iOS.