India begin their five-match Test series against England on August 1. 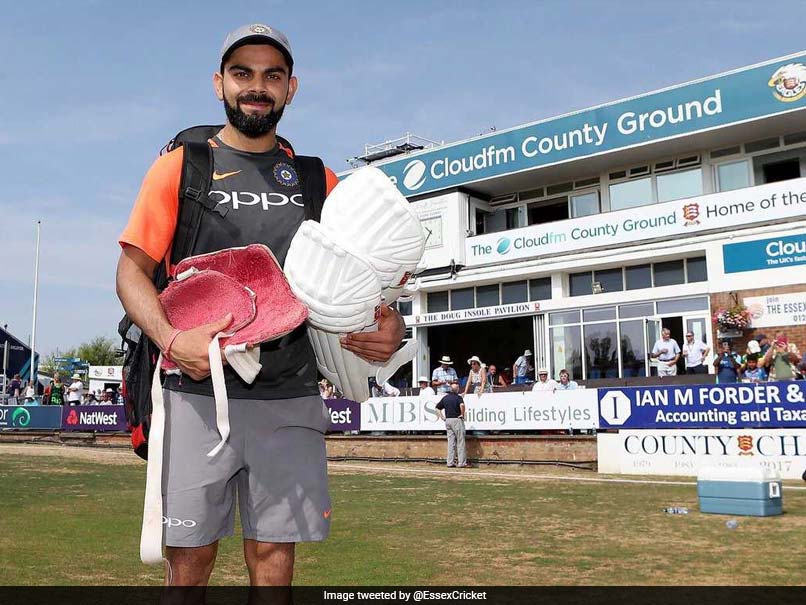 Virat Kohli scored 68 off 93 balls in first innings against Essex during the warm-up game.© Twitter

India are a few days away from the start of the five-match Test series against England that begins on August 1 at Edgbaston, Birmingham. In the preparation of the gruelling Test series, the visitors played a three-day warm-up match against Essex that ended in a draw. The one-off game against Essex left India with plenty to ponder upon as the spinners and the top-order batsmen failed to live up to the expectations. However, five of the Indian batsmen scored a fluent half-century in their first innings. India captain Virat Kohli was among the five to score a half-century, scoring 68 off 93 balls.

Following his half-century, Essex Cricket took to Twitter to congratulate the Indian captain. However, their tweet, "This guy's not bad at cricket... 50 up for @imVkohli off 67 balls!", was not received well by the Indian fans.

This guy's not bad at cricket...
50 up for @imVkohli off 67 balls! #ESSvIND pic.twitter.com/CS6ObCNweT

One Twitter user replied, "Whole world know he is a run machine in world cricket nd u guys know now," while another was certain that the Indian run-machine will score three centuries in the Test series.

He will score atleast 3 centuries this summer to shut the mouth of people like you !!

The caption should be ... This guy's unbelievable in cricket

He have world cup in his hand.. what about you guys?? Or I can say you guys are not bad at lose in world cup matches!! #kiddos

you're being internet explorer of cricket. What u said was being said in 2009. Now, @imVkohli is legend.

With the warm-up game ending in a draw, Virat Kohli will have to take note of the top-order batting line-up as neither Shikhar Dhawan nor Cheteshwar Pujara could get any runs in their kitty. Dhawan ended the warm-up game with a pair and Pujara finished with just 24 runs.

Apart from Umesh Yadav (4/35) and Ishant Sharma (3/59), none of the other pacers could prove to be fatal. Spinners, on the other hand, did not seem to disturb the home side with their bowling.

The last time India toured England, they lost the five-match Test series 3-1 under the leadership of MS Dhoni.

Virat Kohli Cricket England vs India, 2018
Get the latest updates on India vs South Africa and check out  Schedule, Results and Live Score. Like us on Facebook or follow us on Twitter for more sports updates. You can also download the NDTV Cricket app for Android or iOS.