"Wish I Was There To Chuck Pies At You": Yuvraj Singh's Hilarious Birthday Post For Kevin Pietersen 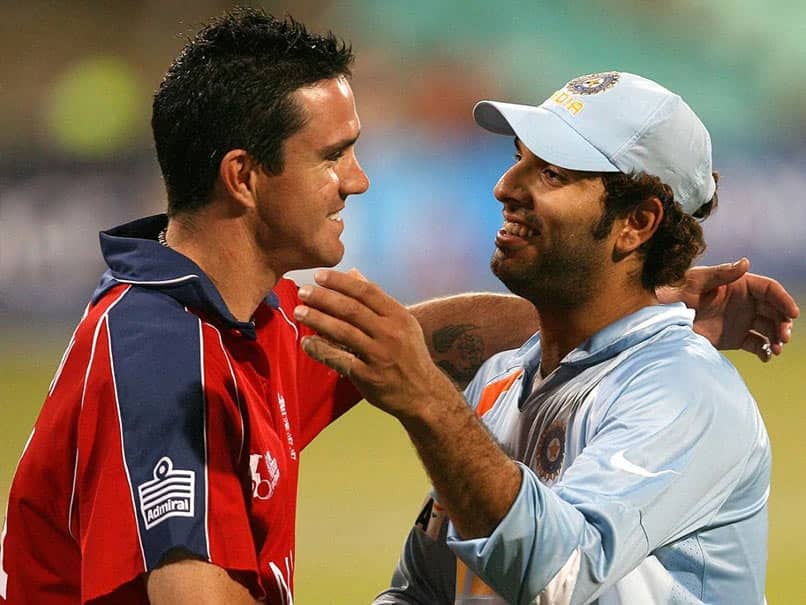 Yuvraj Singh made a hilarious wish for Kevin Pietersen on his 40th birthday.© AFP

Yuvraj Singh took to Twitter to wish former England cricketer Kevin Pietersen who turned 40 on Saturday. Yuvraj and Pietersen both share a great camaraderie but they have time and again engaged in hilarious banters on various social media platforms. Not missing the opportunity, the former India all-rounder made a hilarious wish for former England star on his 40th birthday. Yuvraj wrote that "Wish I was there to chuck pies at you and smash your face with them". On a serious note, Yuvraj wished Pietersen "a wonderful day and year ahead".

"@KP24 my friend it's your birthday. wish I was there to chuck pies at you and smash your face with them! Have a wonderful day and year ahead buddy! More power to you," Yuvraj wrote on Twitter.

Kevin Pietersen, who is among one of the most active former cricketers on social media, soon replied, proving the warmth of his relationship with Yuvraj Singh.

For the uninitiated, it was Pietersen who gave Yuvraj his famous name of "pie chucker" for his unconventional style of bowling.

During an Instagram live session with Pietersen, Yuvraj had revealed that he continues to use an Email ID to date which he made after he called him a "pie chucker" during their playing days.

Talking about the word pie-chucker, Yuvraj told Pietersen, "My email address still has the word ''pie chucker'' in it, I laughed so much when you described me as a pie chucker for my bowling style. I made an email id and included the word pie chucker in that and it is my favourite email address. Sometimes, even my friends go like, hey how are you pie chucker."

Both Yuvraj and Pietersen have also pulled each other's legs over their favourites football clubs. While Yuvraj is a Manchester United fan, Pietersen is a long-time admirer of West London club Chelsea.

Earlier this month, when Yuvraj announced that we will be going live with Manchester United star Marcus Rashford, Pietersen couldn't keep himself from pulling Yuvraj's legs as he commented: "No interest mate. A Chelsea player and I'd be all over it."

To which Yuvraj replied: "If you did not have any interest u would not be commenting! Don't worry will surely talk about how many times we beat Chelsea in the last season."