"Legend On And Off The Field": Yuvraj Singh Responds To Ravi Shastri's Cheeky Sledge

Ravi Shastri got a little revenge on Yuvraj Singh for trolling him about a 2011 World Cup win tweet. 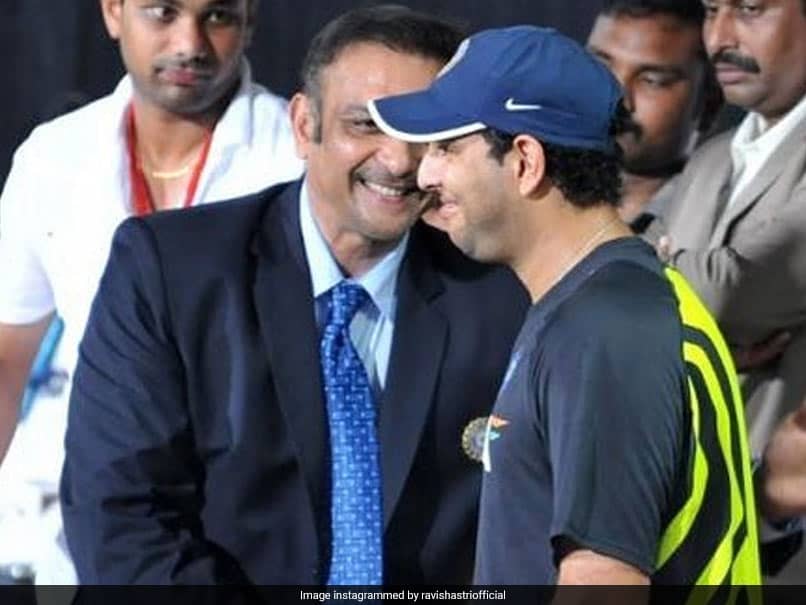 Yuvraj Singh, former India all-rounder, took to Twitter to recall India's first-ever World Cup win that came on June 25, 1983 at the Lord's cricket ground under the captaincy of Kapil Dev. "A moment of national pride, our seniors lifted the 1983 Cricket World Cup on this day Congratulations to every member of the 1983 team You set the benchmark for us to achieve the same in 2011! Looking forward to India becoming a world champion in all sports," Yuvraj tweeted.

Yuvraj, who had trolled Ravi Shastri for not mentioning him and MS Dhoni in a tweet in April, received a funny reply from the current Team India head coach on Thursday after the 38-year-old former all-rounder congratulated the 1983 World Cup-winning squad on the 37th anniversary of India's famous victory at Lord's.

Ravi Shastri took a funny dig at Yuvraj and wrote "Thanks, Junior! You can tag me and Kaps also @therealkapildev."

Thanks, Junior! You can tag me and Kaps also - @therealkapildev https://t.co/EZqRbzYTT7

In reply, Yuvraj called the head coach of Team India a legend on and off the field while heaping praise on the former India captain Kapil Dev.

"Hahahahaha senior ! Your a legend on and off the field Kapil Paaji was a different league altogether," Yuvraj said.

Hahahahaha senior ! Your a legend on and off the field Kapil Paaji was a different league altogether

In April, Ravi Shastri tweeted a video of MS Dhoni's six that sealed the 2011 World Cup win for India and the scenes that followed on the ninth anniversary of the landmark day and wrote "Many Congratulations Guys! Something you will cherish all your life. Just like we from the 1983 group."

Shastri, who was in the commentary box on that fateful evening, also tagged Sachin Tendulkar and current India captain Virat Kohli in his post.

Yuvraj Singh, who was at the non-striker's end when then-captain Dhoni hit the winning runs in 2011, cheekily responded to Ravi Shastri, tweeting, "Thanks senior ! U can tag me and mahi also we were also part of it," with a laughing emoji.

Yuvraj Singh Ravi Shastri Cricket
Get the latest updates on India vs England Series, India vs England , live score and IPL 2021 Auction . Like us on Facebook or follow us on Twitter for more sports updates. You can also download the NDTV Cricket app for Android or iOS.