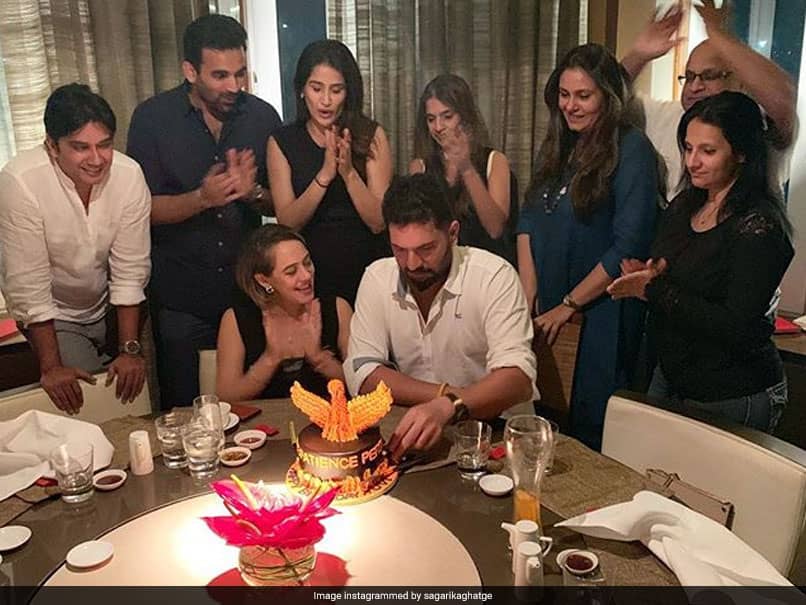 Yuvraj Singh has been one of the most fearless cricketers the Indian cricket team has seen. On Wednesday, the left-handed all-rounder celebrated his 37th birthday by partying with wife Hazel Keech and former teammate Zaheer Khan. Sagarika Ghatge, wife of Zaheer Khan, took to Instagram to wish Yuvraj Singh on his birthday and also uploaded pictures from the party. Apart from them, cricketers also extended their birthday wishes to the swashbuckling batsman. While Sachin Tendulkar dubbed Yuvraj's spirit as "stuff of legends", Virender Sehwag wished him "peace and love".

The spirit with which you have overcome every obstacle in life both on and off the field is the stuff of legends. Wishing a very happy birthday to the one and only @yuvstrong12! Have a great one.#HappyBirthdayYuvi pic.twitter.com/GaMdWG6eUU

Happy birthday Yuvi! Wish you all the joy and happiness in the world! Cheers! @YUVSTRONG12

From being a live-wire on the field to smashing Stuart Broad for six sixes in an over in the 2007 ICC World T20, Yuvraj Singh has given his fans many memories to cherish. Among the many highs of his career, Yuvraj Singh's performance in the 2011 ICC World Cup is right up there. Not only did he win the man of the tournament award (362 runs and 15 wickets) but also played an important role in India's World Cup-winning campaign.

Apart from cricketers, the Board of Control for Cricket in India (BCCI) also uploaded a video of Yuvraj's 138-run knock against England at Rajkot.

Relive his knock of 138 against England at Rajkot pic.twitter.com/aA3npYpEaW

The International Cricket Council (ICC) took to Twitter and wished the Indian all-rounder as well.

11,778 international runs and 148 wickets
Player of the Tournament at the 2011 @cricketworldcup
The fastest ever T20I fifty, off 12 balls

The star left-handed batsman was diagnosed with cancer shortly after the 2011 World Cup. And after successfully completing his chemotherapy cycle in the United States, Yuvraj returned to India in 2012 and made his international comeback in a Twenty20 match against New Zealand.

Yuvraj notched up his career-best ODI score of 150 in January 2017. The 37-year-old achieved this feat in a match against England at Cuttack that India won by 15 runs.

Yuvraj, who has the distinction of notching up the fastest T20I fifty off 12 balls, represented India in 58 T20Is and scored 1,177 runs, with highest being an unbeaten 77.

Having played his last ODI for India in June 2017 against the Windies, the 37-year-old has played 40 Tests, 304 ODIs for India.