Virat Kohli inspires teammates and opponents with his batting and fitness standards. 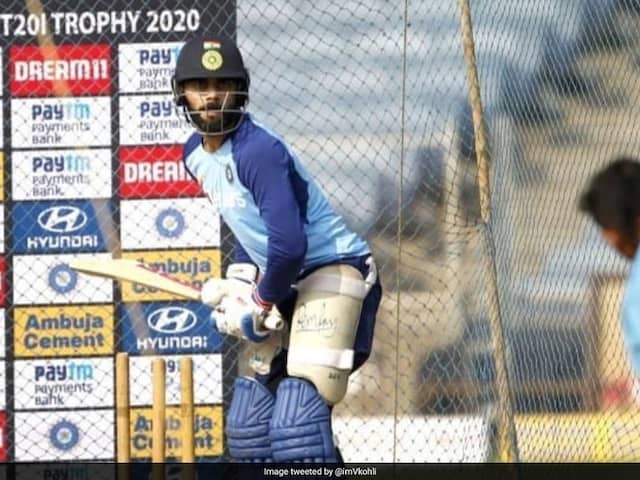 Virat Kohli is currently in Pune to play the third and final T20I between India and Sri Lanka.© Twitter@imVkohli

Virat Kohli, who is a fitness icon in the world of cricket, sometimes likes to indulge and by his own admission "Chholle Bhature" is his favourite cheat meal. Virat Kohli, who is currently in Pune to play the third and final T20I between India and Sri Lanka, took to Twitter and used "Chholle Bhature" as cheat meal in a hilarious analogy. The Indian skipper equated his favourite food to the focus required while facing a bowler. "Ball out of the Bowlers hand and Chholle Bhature for a cheat meal deserve the same kind of focus," Kohli tweeted with a picture from a training session on Thursday.

Ball out of the Bowlers hand and Chholle Bhature for a cheat meal deserve the same kind of focus. pic.twitter.com/ctEs96bvQa

As far as the series is concerned, India lead the three match series 1-0 after the first T20I in Guwahati was washed out without a ball being bowled.

In the 2nd T20I in Indore, Navdeep Saini led a disciplined Indian bowling performance to set up a seven-wicket win on Tuesday.

KL Rahul, who top-scored with 45, and Shikhar Dhawan, who made 32, on his return from injury, put on 71 runs for the opening wicket to lay the platform for India's comfortable chase on a good batting pitch.

Shreyas Iyer, who scored 34 before falling to Lahiru Kumara, and skipper Virat Kohli, who made an unbeaten 30 and hit the winning six, put on a key 51-run stand for the third wicket.

But it was the Indian bowlers who set the platform for victory after Kohli won the toss and elected to field first.

The third and final match is on Friday in Pune.

Virat Kohli India vs Sri Lanka, 2020 Cricket India vs Sri Lanka, 3rd T20I
Get the latest Cricket news, check out the India cricket schedule, Cricket live score . Like us on Facebook or follow us on Twitter for more sports updates. You can also download the NDTV Cricket app for Android or iOS.