With Monday's victory over Bangladesh, Virat Kohli overtook Mohammad Azharuddin's record of 14 Test wins, putting him 12 wins short of MS Dhoni's overall record of most victories in Test matches as captain of India 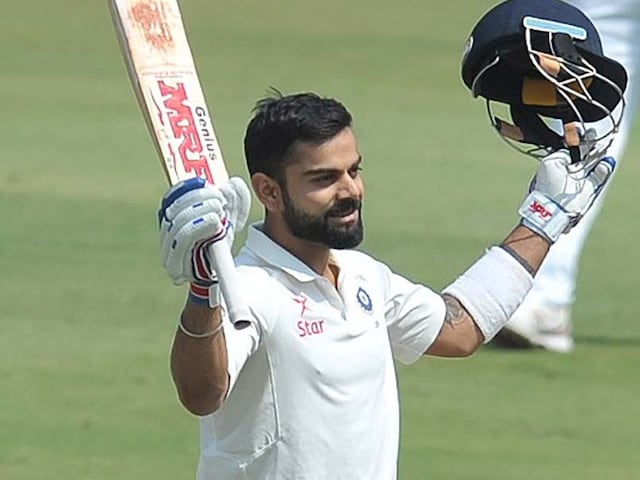 Virat Kohli's time in charge of the Indian Test team has been nothing short of phenomenal. The cricketer from Delhi has captained India in 23 matches and his record very much speaks for itself. Kohli, who was officially named captain of the Indian Test team in early 2015 when Mahendra Singh Dhoni's stepped down abruptly in the middle of the Australia series, completed his 15th win from the 23 games as skipper in the longest format of the game on Monday when India thrashed Bangladesh by 208 runs in the one-off Test in Hyderabad.

Kohli himself scored a match-winning knock of 204 runs in India's first innings, putting the hosts on course for a win. He was duly awarded with the Man of the Match at the end of the clash.

While Kohli's prolific form with the bat has been crucial to India's incredible run of form in Tests, his approach as captain has also helped the team in converting the defeats to draws and the draws to wins.

With Monday's victory over Bangladesh, Kohli overtook Mohammad Azharuddin's record of 14 Test wins, putting him 12 wins short of Dhoni's overall record of most victories in Test matches as captain of India.

With 15 wins in 23 matches, Kohli now boasts of a win percentage of 65.22. Barring Ravi Shastri, who captained India for just one match in 1988, this is the best win percentage for any Indian Test captain in history.

His ongoing 19-match unbeaten streak in also the longest by any Indian captain, one more than Sunil Gavaskar's 18 matches without a loss in the late 70s. India's unbeaten run at home has also extended to 20 following the win in Hyderabad.

There has been a marked change in the way India have approached Test matches under Kohli's captaincy. While the team's home form has been exceptional, there has been visibly more aggression in India's approach.

Kohli is at the helm of a side with a formidable batting line-up, but the team has managed to maintain higher run rates whenever required, as was seen against England and Bangladesh.

Kohli has also been aided by the improved batting form of the tail-enders. With Ravichandran Ashwin and Ravindra Jadeja in peak form and the pacers having shown great form in recent months, the Indian team has been almost unstoppable.

With Australia set to tour India for a four-match series, India will be overwhelming favourites to continue the incredible run of form under Virat Kohli's stewardship.

Comments
Topics mentioned in this article
India Cricket Team Bangladesh Cricket Team Virat Kohli Rajiv Gandhi International Stadium, Hyderabad Cricket
Get the latest Cricket news, check out the India cricket schedule, Cricket live score . Like us on Facebook or follow us on Twitter for more sports updates. You can also download the NDTV Cricket app for Android or iOS.