Viral: Day After Being Run Out At Non-Striker's End, Charlie Dean Did This

Charlie Dean had everyone on scene in splits as she pretended to run the non-striker out a day after she was dismissed in similar fashion by Deepti Sharma. 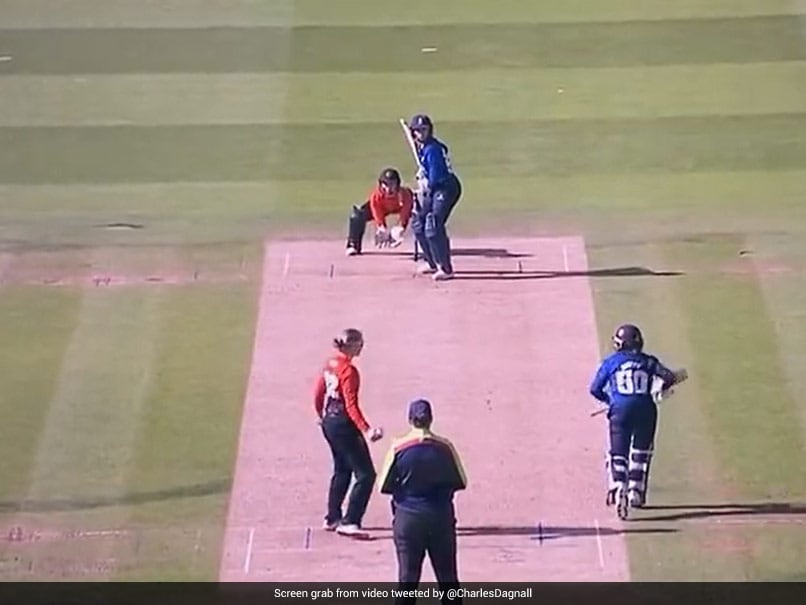 When Deepti Sharma ran England's Charlie Dean out at the non-striker's end for backing up too much, it caused an uproar, with several players and analysts bringing up the 'spirit of cricket' debate again. But the21-year-old bowling all-rounder herself seemed to take her dismissal in her stride, even though she was in tears as she walked off at Lord's. A day later, playing in the final of the Rachael Heyhoe Flint trophy, Dean left her teammates and opponents in splits as she saw the lighter side to the whole episode.

Playing for Southern Vipers in the women's domestic List A tournament final at the same venue where she faced heartbreak the previous day, Dean began her spell with the eighth over of the match.

Northern Diamonds's Linsey Smith took a single off her first delivery. Then, bowling to Lauren Winfield-Hill, Dean stopped in her run-up with Smith starting to back up and pretended to run her out.

Smith was just out of her crease and she quickly stopped before both players broke into laughter.

Even Winfield-Hall at the striker's end and Vipers wicketkeeper Chloe Hill could not stop their laughter.

Charlie Dean today. Brought a smile to the face this did. pic.twitter.com/P447ysZfPM

Coming in to bat with England in dire straits at 65/7 in their chase of 170 in the third ODI against India on Saturday, Charlie Dean nearly pulled off a miraculous chase.

She put on 38 runs with Amy Jones, who fell to Renuka Thakur for 28.

Kate Cross joined her at the crease and scored 10 before she became the legendary Jhulan Goswami's final international scalp.

If England had wrestled any momentum back and were threatening to upset India after their early collapse, India were right back on top needing just one wicket to win.

But Dean remained resilient, putting away the bad balls and not giving India a chance as she and the last batter Freya Davies took England within 17 runs of a famous win, but it wasn't to be.

While India won the match to seal a series sweep, Dean's gritty knock was a big positive for England.

India Women Charlie Dean Deepti Sharma Cricket
Get the latest updates on IPL Auction 2023 and check out  IPL 2023 and Live Cricket Score. Like us on Facebook or follow us on Twitter for more sports updates. You can also download the NDTV Cricket app for Android or iOS.