Watch: Jofra Archer Marks Return From Injury With A "Snorter" To Get Zak Crawley 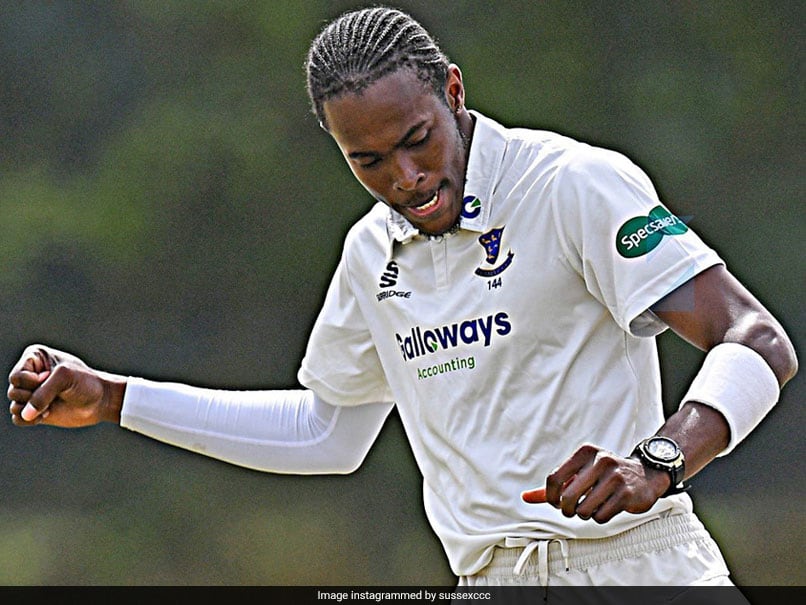 Sussex vs Kent: Jofra Archer celebrates a wicket in the County Championship.© Instagram

Jofra Archer marked his return to competitive cricket with two brilliant wickets for Sussex against Kent in their ongoing County Championship fixture. The England international had been out of action due to an injury on his right hand, and also had to skip IPL 2021. For his first dismissal on Day 1 on Thursday, the pacer sent Daniel Bell-Drummond back to the pavilion. The Kent skipper edged the ball to second slip during Archer's third over of the innings. In his fourth over, Archer took the wicket of Zak Crawley, who edged a snorter to the wicketkeeper. Sussex shared a video of Archer's dismissal of Crawley on Twitter, and captioned it as, ""That's a SNORTER!" Two wickets already for @JofraArcher!"

Archer was sent back to the United Kingdom midway through England's tour of India this year, after his injury worsened.

He had suffered a cut to his hand while cleaning at his home in January. Despite the injury, he played in two Test matches and five T20Is vs India, before departing for the UK, where his progress has been monitored by the medical team of Sussex since then.

The pacer's brilliant return will be good news for the ECB, with England scheduled to host New Zealand in a two-match Test series this year, and also India in a five-match bilateral series.

The T20 World Cup is also scheduled to be held this year in India, and Archer will be a key part of England's bowling department.

England Cricket Team IPL 2021 Cricket
Get the latest updates on ICC T20 Worldcup 2022 and CWG 2022 check out the Schedule, Live Score and Medals Tally. Like us on Facebook or follow us on Twitter for more sports updates. You can also download the NDTV Cricket app for Android or iOS.