South Africa vs Bangladesh: Bangladesh fans were left disappointed after plenty of on-field calls went against their side in the 1st Test at Durban. 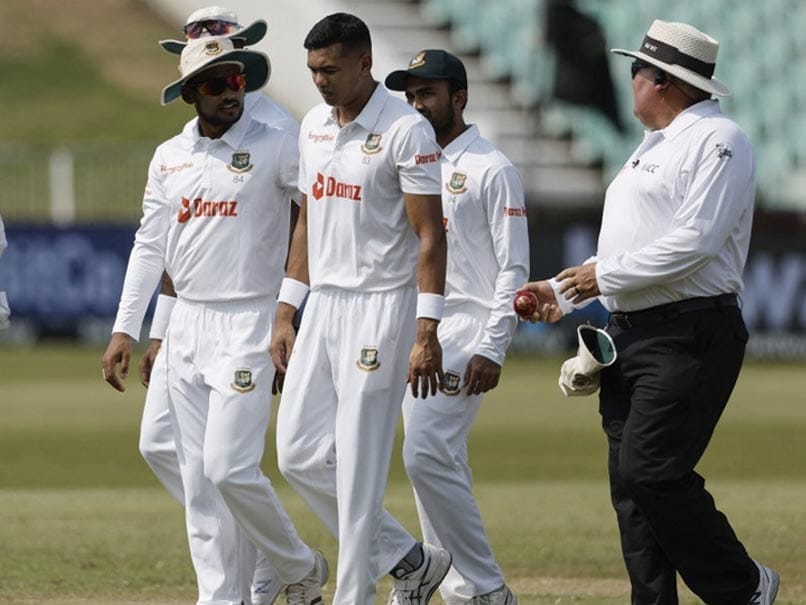 Bangladesh players along with umpire Marais Erasmus walk off the ground.© AFP

Bangladesh lost the 1st Test of the two-match series against South Africa by 220 runs on Monday after Keshav Maharaj took seven wickets in the fourth and final innings. The visitors were bundled out for 53 and as a result, the Proteas gained a massive victory. However, the attention has been taken away from Maharaj's performance and Bangladesh fans took to Twitter to express their disappointment after some on-field calls went against them in South Africa's second innings.

In South Africa's second innings, Bangladesh made quite a few LBW appeals and some of them were very close with the replays showing the ball to be hitting the stumps. In the 19th over of the innings, Bangladesh had managed to get Adrian Holdstock's not-out decision overturned to dismiss Sarel Erwee.

Then in the 26th over, pacer Khaled Ahmed had an LBW decision going against him with Keegan Petersen on strike. Bangladesh did not opt for a review and replays showed that it would have hit the stumps.

Former Bangladesh skipper Shakib Al Hasan also took to Twitter to express his disappointment with the on-field umpiring from Adrian Holdstock and Marais Erasmus. "I think it's time for #Icc to back to neutral umpires as covid situation is ok in most cricket playing countries. #SAvBAN," Shakib had tweeted on Sunday.

I think it's time for #Icc to back to neutral umpires as covid situation is ok in most cricket playing countries. #SAvBAN

A Bangladesh fan compiled a video of decisions going against Bangladesh and he captioned the post as One-sided umpiring in #Durban #Southafrica #SAvsBAN #icc @ICC."

One fan said that going back to neutral umpires is the need of the hour. "Shakib Al Hasan has called for neutral umpires in international cricket once again. Bangladesh were unhappy with the umpiring yesterday, and I agree. Some of the LBWs that weren't given was unbelievable," the fan tweeted.

Shakib Al Hasan has called for neutral umpires in international cricket once again.

Bangladesh were unhappy with the umpiring yesterday, and I agree. Some of the LBWs that weren't given was unbelievable.#SAvBAN #SAvsBAN

I see that Bangladesh have laid a complaint against the umpiring in the 1st test. I get that completely - there were a number of mistakes & it did seem like the Proteas got the rub of the green & umpire's call. Time to move back to neutral umpires me thinks.

Shameful umpiring by the South African officials. This is why we need neutral umpires in every international match. The blatant cheating by the umpires against Bangladesh has been appalling https://t.co/GTEJrUZoIg

Bangladesh team director Khaled Mahmud was also not happy with some of the on-field calls and he made his voice heard after stumps on Day 4. "There was no hiding from the poor umpiring in today's play. A number of decisions went against us. We also missed out on a wicket when the boys seemed scared of taking a review. If we got those decisions, we might be chasing 180 instead of 270," ESPNcricinfo quoted Mahmud as saying.

"To be really honest, I have seen such inconsistency in umpiring after a long time. But the umpires are the best judge on the field. We have to accept the decisions," he further stated.

South Africa and Bangladesh will now square off in the second Test, beginning April 8.

Shakib Al Hasan South Africa vs Bangladesh, 1st Test Cricket
Get the latest updates on IPL Auction 2023 and check out  IPL 2023 and Live Cricket Score. Like us on Facebook or follow us on Twitter for more sports updates. You can also download the NDTV Cricket app for Android or iOS.