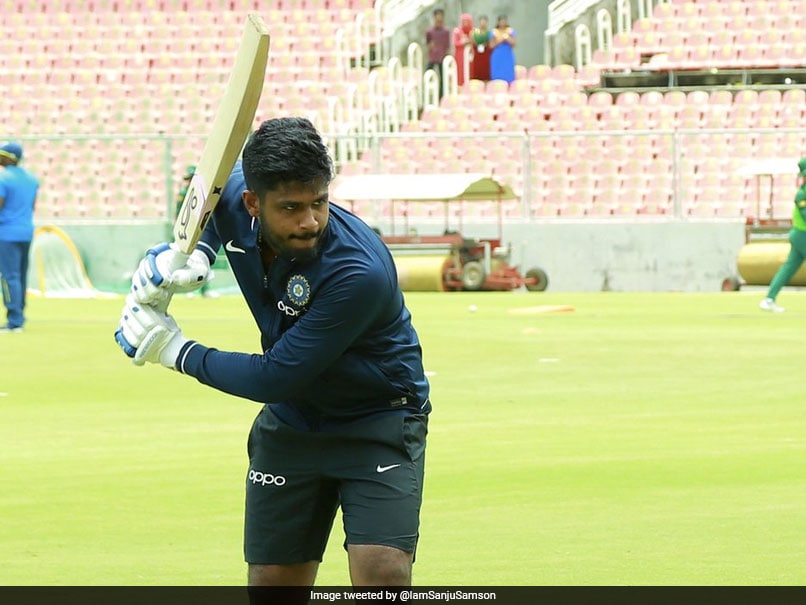 Sanju Samson scored 21 boundaries and 10 sixes in his sensational knock.

Sanju Samson scored a scintillating double century for Kerala against Goa in the ongoing Vijay Hazare Trophy on Saturday. Coming in after the loss of one wicket after four overs, the explosive batsman smoked a 129-ball 212 and remained unbeaten at the end of Kerala's innings in the List A match. Samson, who had not scored a single List A century before this match, posted his highest-ever score in the 50-over format. In fact, he even eclipsed his First Class record of 211 runs.

Batting first, Kerala lost Robin Uthappa after 3.5 overs. Samson came in to bat and smashed 21 boundaries and 10 sixes en route to his mammoth score. Sanju Samson put up a 338-run stand for the third wicket with Sachin Baby, who also scored a century, as Kerala posted 377 in 50 overs.

Samson's stunning effort was the fastest double-century by an Indian in List A cricket.

Former India opener Gautam Gambhir took to Twitter to congratulate the Kerala batsman on his outstanding knock. "Well done @IamSanjuSamson on a double hundred in a domestic one-day game!!! This man is bursting at seams with talent and talent must meet opportunity very soon," he tweeted.

Well done @IamSanjuSamson on a double hundred in a domestic one-day game!!! This man is bursting at seams with talent and talent must meet opportunity very soon @BCCI @StarSportsIndia #VijayHazareTrophy #VijayHazare

Gambhir has been vocal in his support of Sanju Samson before. With the raging debate going on about India's No. 4 in the limited overs formats and gloveman Rishabh Pant's place in the squad, Gambhir had suggested that Sanju Samson should be given a chance for his explosive batting.

In transit in Frankfurt on the way to the @IPUparliament meeting in Belgrade when i get the news that Thiruvananthapuram's own Sanju Samson has hit 200 in a Vijay Hazare 50 over game! Ten sixes, 20 fours. Don't know if our white-ball selectors were watching?! pic.twitter.com/tnJmf6QNRM

"Personally, I have always backed Sanju Samson ahead of Rishabh for wicketkeeper-batsman's role," he had said.

Sanju Samson's previous top score in the 50-over format was a 48-ball 91 that helped India A beat South Africa A last month. The knock had earned him praise from former India bowler Harbhajan Singh, who also suggested that the Kerala gloveman be considered for the no.4 slot for India.

Sanju Samson Cricket
Get the latest updates on SA vs IND 2021-22, check out the Schedule and Live Score . Like us on Facebook or follow us on Twitter for more sports updates. You can also download the NDTV Cricket app for Android or iOS.