Gautam Gambhir was all praise for Sanju Samson and paid him the ultimate compliment after the Rajasthan Royals smashed the 1st century of IPL 2019. 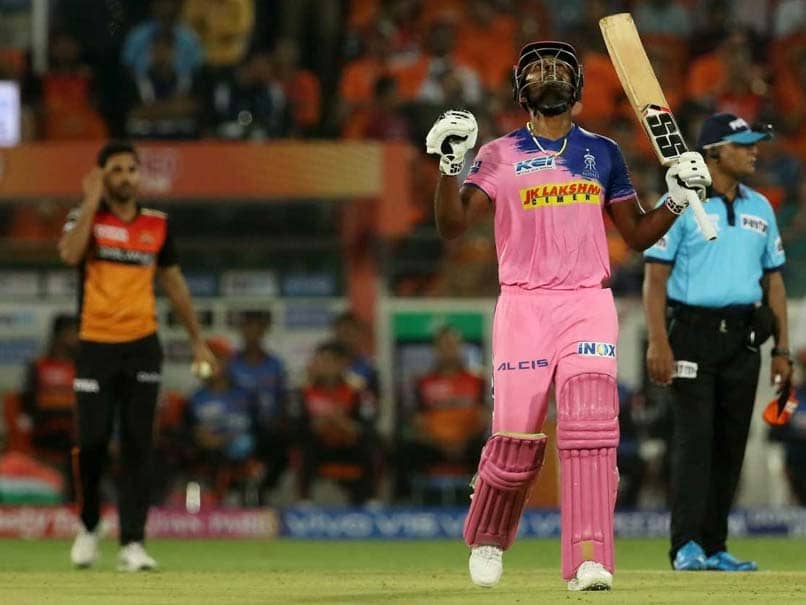 Sanju Samson smashed the first century of IPL 2019 during SRH vs RR clash on Friday.© BCCI/IPL

Sanju Samson lit up IPL 2019 with a sensational century, the first of this season. The 24-year-old was in sparkling form, carting the SunRisers Hyderabad bowlers to all parts of the ground. This was Sanju Samson's second IPL century, helping him join an elite list of Indian batsmen with more than one IPL hundred. Sanju Samson remained unbeaten on 102 that came off just 55 balls with the help of 10 fours and four hits over the fence. Gautam Gambhir was all praise for the Rajasthan Royals star and paid him the ultimate compliment when he dubbed him "the best Wicketkeeper batsman in India".

Gautam Gambhir also backed Sanju Samson to get into the India World Cup 2019 squad, saying he should get the much-talked about No.4 spot in the batting order.

I normally don't like to talk about individuals in cricket. But seeing his skills I am glad to note that Sanju Samson is currently the best Wicketkeeper batsman in India. For me he should be batting number 4 in the World Cup @BCCI @rajasthanroyals @IPL @StarSportsIndia

Gambhir comments might come as a surprise for many. While MS Dhoni is not the force he once was with the bat hand, he remains India's number one wicketkeeper and is a sure-shot starter for India in the World Cup in England and Wales.

To say Dhoni's fans were upset with Gambhir's "best Wicketkeeper batsman in India" claim would be an understatement.

We all know that you are always against Dhoni. Anyhow @BCCI won't consider your thoughts and comments. Thank you for your time.

Did you ever heard of MS DHONI. The best wicketkeeper batman of all time.

oh god how jealous he is with MSD... nothing learned

King of Jealousy. Idiot don't you have common sense ? MSD is the world's best keeper even you know this but your intention is to insult MSD . Yaaaaaak Thu .

This shows he is clearly jealous of Dhoni(his interviews) and Rishabh Pant (commentary, happenings in DDCA and Delhi Daredevils)
You lost my respect Gambhir.
Samson is a one match player

*best 4th batsman, not best "wicketkeeper" batsman!! No one can replace Dhoni.
Requesting @narendramodi to hand him some work in Delhi BJP, keep him out of IPL.

Fans were also taken aback with the fact that Gambhir decided to put Samson ahead of Rishabh Pant, who too has been in brilliant form off-late and impressed with the bat in both of Delhi Capitals' matches this season.

seriously
One innings
And best wk batsman
Dhoni pant... What they are doing

May be after the world cup! @RishabPant777 is on cards.

Rishabh is the best with MSD

Very irresponsible comment gautam ..... He cant match the exp and skills of mahi bhai and the power hitting of pant...and btw DD was so good in IPL last year and KKR is so good from previous two years...now i understand why

Rishabh pant in my opinion ( after Dhoni)

While Rishabh Pant has failed to take his chances in Twenty20 Internationals, averaging just 19.42 in 15 matches, he has been explosive in the Indian Premier League.

MS Dhoni IPL 2019 Sunrisers Hyderabad vs Rajasthan Royals, Match 8 Cricket
Get the latest updates on IPL 2021, IPL Points Table , IPL Schedule 2021 , live score . Like us on Facebook or follow us on Twitter for more sports updates. You can also download the NDTV Cricket app for Android or iOS.