Ranji Trophy: Delhi skipper Dhruv Shorey and Nitish Rana stitched a 122-run partnership for the second wicket, helping their side recover from early damage and finish Day 2 at 195/4 against Punjab. 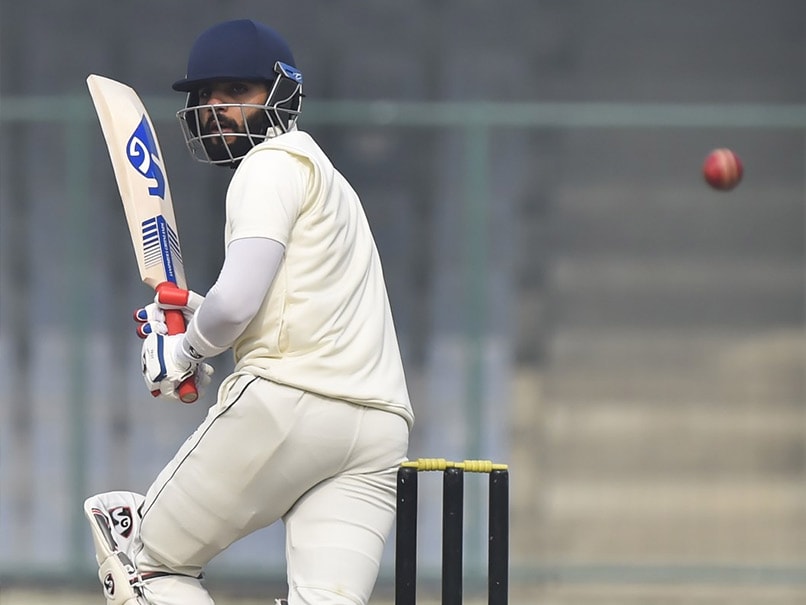 Skipper Dhruv Shorey missed his ton by a mere four runs while Nitish Rana was batting on 64 as Delhi ended the second day of their Ranji Trophy tie against Punjab at 195/4 at the IS Bindra Stadium, Mohali on Saturday. Earlier in the day, Punjab resumed play from 266/8 and could manage another 47 runs on board before being bundled out by the visitors as Kunwar Bidhuri and Tejas Baroka scalped three wickets each while Suboth Bhati picked two. Later, Delhi lost their opener Anuj Rawat cheaply before Shorey and Rana shared a 122-run partnership to repair the early damage.

In Kolkata, Gujarat were 46/1 against Bengal as bad light forced an early closure of play. The first day of the contest was also washed out due to continuous rain on Friday.

When most of the Hyderabad batters faltered, stumper Kolla Sumanth's rose to the occasion and slammed an unbeaten 91 to take his side to 193/8 against Kerala at the end of the day. Sandeep Warrier picked up four wickets for the visitors, who could only manage 164 in their first essay.

Rajasthan were 23/2 in their second innings and still trail by 83 runs against Andhra, who had put up 257 runs in their first essay while replying to the hosts' paltry total of 151 in Jaipur.

Opener Rameez Khan's unbeaten 161 followed by a couple of half-centuries by Venkatesh Iyer (55) and Gautam Raghuwanshi (64) powered Madhya Pradesh to 364/7 at the close of play against Himachal Pradesh, who were skittled out for 175 runs in their first innings.

Mumbai's poor show continued on the second day as well as the hosts were reeling at 109/5 in their second innings and took a small 85-run lead against Karnataka at home. Earlier after bowling out Mumbai for 194 runs in their first essay, the visitors had scored 218.

In Kanpur, despite a cautious start, Tamil Nadu were reduced to 165/6 at stumps as Saurabh Kumar and Ankit Rajpoot picked up three and two wickets respectively for Uttar Pradesh. Earlier, no play was possible on the first day due to rain.

Railways were 201 runs away from victory as they were yet to open their second innings account and had lost opener Avinash Yadav for a duck against Baroda.

Maharashtra were on the verge of defeat after ending the day at 93/5 in their second essay and still trail by 148 runs against Services in Delhi. Earlier, Services had put up 285 runs on board while replying to Maharashtra's paltry first innings total of 44 runs.

Uttarakhand were 32/4 at the close of play as Assam's Ranjit Mali (3/11) shattered the hosts' top order in Dehradun. Earlier, Riyan Parag's 123 had guided Assam to 294 in their first essay.

Jammu and Kashmir trail by 124 runs against hosts Jharkhand and ended the second day at 135/3 with opener Suryansh Raina contributing with 76 runs in Ranchi. Earlier, the hosts had managed 259 runs in their first innings as Abid Mushtaq's (5/56) fifer had rattled the Jharkhand batting line-up.

In another low-scoring contest, Chhattisgarh were wrapped up for 119 runs as Haryana took a small four-run lead after putting up 123 runs in their first essay in Raipur.

Bihar were trailing by 152 runs after ending the day at 226/8 against Mizoram in Patna. Earlier, Pratik Desai's scintillating 192 along with Taruwar Kohli's 95 had propelled Mizoram to a healthy 378 in their first essay. The visitors later rode Kohli's (4/61) four-fer to took control of the contest.

Manipur trail by a huge margin of 426 runs after closing the day at 21/4 in their second innings against Goa, who had declared their innings at 553/5 in Porvorim.

Puducherry took a small 15-run lead after putting up 80 runs in reply to Meghalaya's first innings total of 65 runs.

Skipper Manan Vohra's unbeaten 107 along with opener Arslan Khan's 87 powered Chandigarh to 263/3 against Nagaland in Dimapur. For Nagaland, Nagaho Chishi picked up a couple of wickets conceding 34 runs.

No play was possible in the contest between Sikkim and Arunachal Pradesh as rain played spoilsport for the second consecutive day.

Punjab Cricket Association Stadium, Mohali Cricket
Get the latest updates on IPL 2021, check out the IPL 2021 Schedule and Indian Premier League Live Score . Like us on Facebook or follow us on Twitter for more sports updates. You can also download the NDTV Cricket app for Android or iOS.