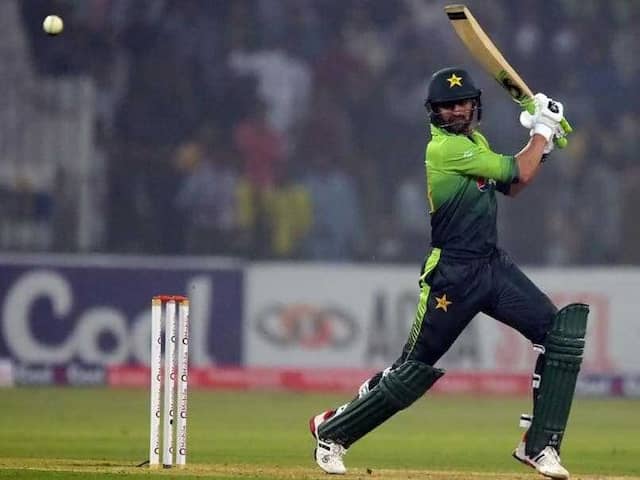 Shoaib Malik scored 10 off 13 balls in the second ODI against New Zealand.© AFP

Fakhar Zaman and Shaheen Afridi helped Pakistan register a six-wicket victory against New Zealand to level the three-match ODI series 1-1. While Pakistan's victory was overshadowed by Imam-ul-Haq's injury scare, Shoaib Malik's bizarre dismissal in the match grabbed eyeballs too. The incident took place in the 33rd over of the Pakistan's innings. Lockie Ferguson bowled a short delivery. which Malik pulled with great force. However, the ball hit Nicholls at short leg and ricocheted up in the air, only for Ish Sodhi to run in from mid-wicket and complete an easy catch.

Even though Malik was dismissed, he made sure to check up on Nicholls before walking off the field. Nicholls, on the other hand, was quick to brush off the injury and stand on his feet.

On the match front, Zaman (88 off 88 balls) stitched together a 101-run partnership with Babar Azam (53 off 49 balls) to help Pakistan overhaul the target in 40.3 overs and end their 12-match losing streak against New Zealand in ODIs.

Shaheen Afridi, adjudged player of the match, returned with figures of 4/38 in 9 overs, including one maiden.

"It was a complete team performance. We were hoping for a comeback and we did that, indeed. We were trying to use the new ball. Shaheen Afridi is good with that. The way we batted tonight, it was great. Babar played the bouncer well. It was a superb display of batting," Sarfraz said.

"Our bowlers did well to contain the batsmen earlier. Spinners did a good job in the middle overs and then the pacers took wickets. We'll try to play good cricket and win the final game," Sarfraz further added.

The series decider is slated to be played at the Dubai International Cricket Stadium on November 11.

New Zealand Cricket Team Henry Nicholls Shoaib Malik Lockie Ferguson Cricket
Get the latest Cricket news, check out the India cricket schedule, Cricket live score . Like us on Facebook or follow us on Twitter for more sports updates. You can also download the NDTV Cricket app for Android or iOS.