During a PSL game between the Multan Sultans and the Quetta Gladiators, a hilarious incident took place that saw umpire Aleem Dar try to stop the bowler from celebrating a wicket. 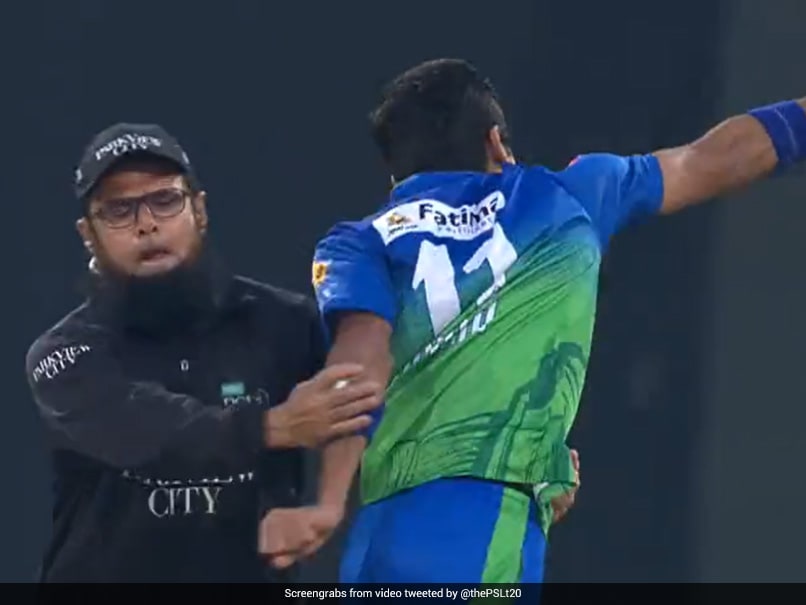 The ongoing Pakistan Super League (PSL) is approaching the business end of the season. Multan Sultans, led by Mohammad Rizwan, currently top the table with 16 points after 9 games. Multan currently hold a four-point advantage over second-placed Lahore Qalandars, who defeated the Islamabad United on Saturday. During Multan's last game against the Quetta Gladiators on Friday, a hilarious incident took place during the Gladiators innings. During the 14th over of the Gladiators' innings, Multan pacer Shahnawaz Dahani castled Naseem Shah on the fourth delivery.

Elated by the wicket, Dahani turned back and sprinted towards the crowd to celebrate. Umpire Aleem Dar jokingly tried to stop Dahani from doing so but was unsuccessful.

A video of Aleem Dar's hilarious attempt to stop Dahani from celebrating was shared by PSL on their official Twitter account.

Multan Sultans eventually won the game by a massive 117-run margin at the Gaddafi Stadium in Lahore.

After electing to bat first, Multan posted a massive total of 245 for 3 in 20 overs.

Opener Shan Masood and skipper Rizwan added 119 runs for the first wickets, before the former was dismissed for 57 in the 12th over.

Rossouw was dismissed after a 26-ball 71 while Rizwan remained unbeaten on 83 off just 54 balls.

In reply, Quetta were skittled out for a total of 128 with Umar Akmal top-scoring with a 23-ball 50.

Having already qualified for the play-offs, the Sultans will take on Islamabad United in their final group game later on Sunday in Lahore.

Umar Akmal Cricket Khushdil Shah Naseem Shah
Get the latest updates on Fifa Worldcup 2022 and check out  Fifa World Cup Schedule, Stats and Live Cricket Score. Like us on Facebook or follow us on Twitter for more sports updates. You can also download the NDTV Cricket app for Android or iOS.