"No Need To Look Back": Virat Kohli's Inspirational Message For Fans

Virat Kohli shared an inspirational message for his fans on Instagram. 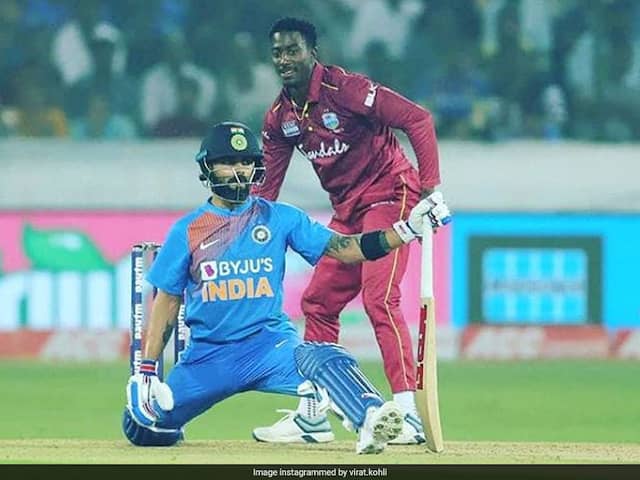 Virat Kohli shared a photo from a match against the West Indies.© Instagram

India captain Virat Kohli took to Instagram to share a motivational message for his fans. Kohli uploaded a picture from a match against the West Indies, where he can be seen down on one knee with his other leg stretched ahead. West Indies bowler Hayden Walsh Jr can also be seen in the picture. "No need to look back. As we move only one way - AHEAD," the stylish right-hander captioned the photo. Kohli is currently spending time at home with Anushka Sharma, with India still under the coronavirus-enforced lockdown.

No need to look back. As we move only one way - AHEAD.

Virat Kohli appeared on an Instagram Live chat with India's football team captain Sunil Chhetri, where he spoke about various aspects of life.

He has been posting snippets of his life during the lockdown, as well as advising people to stay home and maintain social distancing.

Virat Kohli was slated to appear for RCB in the 13th edition of the Indian Premier League (IPL), but the coronavirus pandemic has seen the competition postponed indefinitely by the Board of Control for Cricket in India (BCCI).

Kohli is expected to get back to practice soon, after the government announced new regulations on Sunday that state that stadiums and sports complexes can be opened, but no spectators will be allowed.

He is the all-time highest scorer in the shortest format of the game.