Nathan Coulter-Nile completed his four-over spell but by the end of it he looked dizzy and sat on the pitch. 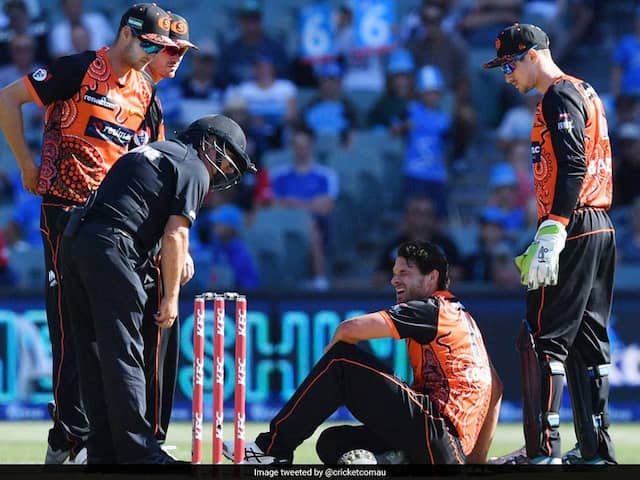 Nathan Coulter-Nile was included in Australia's squad for the upcoming India tour.© Twitter

Nathan Coulter-Nile was taken to the hospital after he suffered a bout of vertigo during a Big Bash League (BBL) match at Adelaide Oval on Saturday. The 31-year-old fast bowler was included in Australia's 16-man squad for the upcoming limited-over tour of India. Bowling for Perth Scorchers, Nathan Coulter-Nile delivered the fifth ball of his final over in the T20 match against the Adelaide Strikers before signaling uneasiness. Coulter-Nile completed his four-over spell after consulting with Perth captain Mitchell Marsh but by the end of it he looked dizzy and sat on the pitch.

"He was taken to hospital after the game as a precaution and will be monitored over the next few hours," Quinnell said on the BBL website.

Coulter-Nile's inclusion in Australia's squad for the India tour came after he was left out of the recent home limited overs internationals with back issues.

Eleven of the 14 players that took on Virat Kohli's men in a recent one-day series loss in Australia have been retained.

But veteran seamer Peter Siddle, fast bowler Billy Stanlake and all rounder Marsh were dropped, which has opened the door for pacemen Kane Richardson and Nathan Coulter-Nile, and hard-hitting batsman Ashton Turner.

"Nathan Coulter-Nile provides us with another quality bowling option. He brings good energy in the field and can also score runs in high-pressure situations," said national selector Trevor Hohns.

The squad for the Pakistan series, that immediately follows India, will be named later with the possibility that Steve Smith and David Warner may be considered for the latter part once their bans for ball-tampering expire on March 29.

Nathan Coulter-Nile Cricket
Get the latest Cricket news, check out the India cricket schedule, Cricket live score . Like us on Facebook or follow us on Twitter for more sports updates. You can also download the NDTV Cricket app for Android or iOS.