MS Dhoni's controversial run-out decision got a lot of reactions from all over the world. 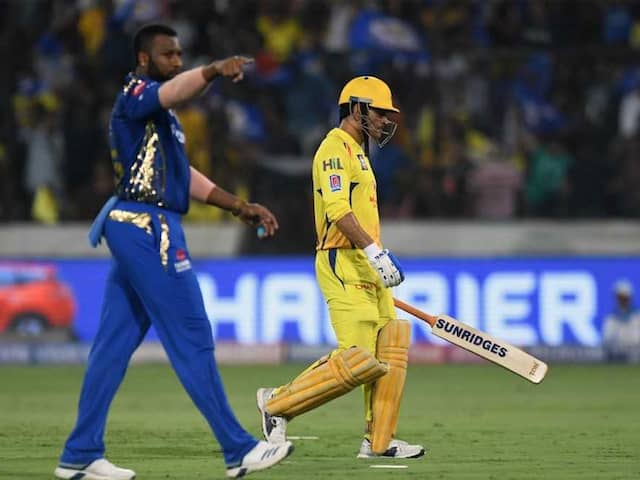 MS Dhoni was run out in Sunday's final against Mumbai Indians for two.© AFP

MS Dhoni, the Chennai Super Kings skipper, is the lifeline of his Indian Premier League (IPL) franchise. MS Dhoni was run-out in Sunday's final against Mumbai Indians for two, leaving CSK in trouble at 82/4. CSK fans were hell-bent that the 37-year-old was not out, while there were many others who suggested otherwise. Since IPL is one of the most-watched T20 leagues in the world, the controversial run-out decision got a lot of reactions from all over the world. New Zealand cricketer Jimmy Neesham also gave his two cents by uploading an image from the match. "I love how passionate some fans are about our sport. I have huge respect for MS but how anyone could see the below photo and say it's not out truly astounds me," Neesham had written.

Soon, the New Zealand all-rounder was bombarded with a lot of "dumb comments" on his feed, forcing him to remove the post.

Neesh, there are two sides to a coin mate. Your very same picture at the exact moment from another angle. Care to Google about optical illusion maybe? pic.twitter.com/e1NddbXV8A

I might google optical illusion if I was 4 years old

That's exactly why he is asking you to google. Grow up Jimmy

After deleting the original post, Neesham took to Twitter to explain why he did it and wrote, ""I've deleted my tweet about MS Dhoni's runout, not because I've changed my mind, but because: 1. I'm sick of seeing the same dumb comments in my feed 200 times a day. 2. I just don't actually care. Please don't bother tweeting me about it again. Have a good day everyone."

I've deleted my tweet about MS Dhoni's runout, not because I've changed my mind, but because:

Please don't bother tweeting me about it again. Have a good day everyone

Chasing 150 to win their record 4th IPL title, Chennai Super Kings lost their captain and top-scorer of the season when he tried to steal an extra run in the 13th over. A direct hit from Ishan Kishan at the non-striker's end looked like a close call was referred to the third umpire.

After a series of replays and deliberation, Nigel Llong gave MS Dhoni out.

James Neesham Cricket
Get the latest Cricket news, check out the India cricket schedule, Cricket live score . Like us on Facebook or follow us on Twitter for more sports updates. You can also download the NDTV Cricket app for Android or iOS.