Hussey had previously claimed in his book The Southern Cross that BCCI chief N Srinivasan's son-in-law had been 'put in charge' of CSK. The 38-year-old says that he has apologised to Srinivasan for his claims. 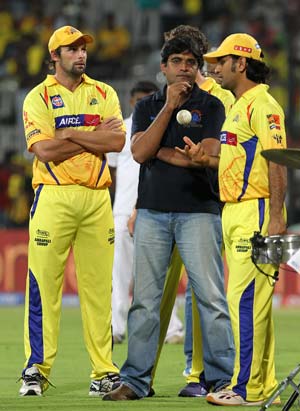 Just days after claiming that Gurunath Meiyappan, who has been chargesheeted by the Mumbai police in the IPL betting scandal, was actually running the Chennai Super Kings team, Michael Hussey on Monday made a U-turn, saying that he might have got it wrong. (Read: IPL spot-fixing: Gurunath Meiyappan, Raj Kundra to be called for questioning by probe panel)


In his book -- Underneath The Southern Cross -- the CSK opener and former Australia batsman has said that the Chennai IPL team owner and BCCI president N Srinivasan had handed control of the franchise to his son-in-law Gurunath. (Also read: Chargesheet against Gurunath Meiyappan has nothing to do with me: N Srinivasan)


But, Hussey backtracked his assertion, saying that he was not completely clear about Gurunath's position in the CSK team, according to a report. (Related read: IPL spot-fixing: Will heat on Meiyappan also burn CSK's future?)


"Certainly Guru was around the team a lot. I knew he was talking to Kepler Wessels (Super Kings' coach in IPL 2008) and the players, and we saw him at training and at the hotel.

I didn't know what his official title was but he was around the team quite often. I probably may have written the wrong thing," Hussey was quoted as saying by ESPNcricinfo.

"I knew he was a close part of the team, no question about that, and I saw him around the team pretty much every day. (But) I am certainly not going to question the word of Mr Srinivasan. I think he would know a lot better than me about who is running the show. So maybe I got that a little bit wrong," he added.

Hussey also said that he has met Srinivasan, who is the vice-chairman and managing director of India Cements which owns CSK, and has apologised.

Stating that he has cleared the air with Srinivasan when he met him during a team dinner, Hussey said, "We had a team dinner where Mr Srinivasan came along. I spoke to him very briefly about it and apologised if I caused him any grief.

"He was fine and said, 'No, don't worry, it is all fine. There is no issue. It was all written before all the controversies came out, anyway. You don't have anything to worry about.'"

Hussey said he hoped to be associated with the CSK in some capacity even after he stops playing.

"I thoroughly enjoyed my time there and they are a fantastic franchise. I would love to continue there in whatever capacity in the future," he added.

Comments
Topics mentioned in this article
Chennai Super Kings Sourav Ganguly Sreesanth Cricket Michael Hussey BCCI
Get the latest updates on ICC T20 Worldcup 2022 and CWG 2022 check out the Schedule, Live Score and Medals Tally. Like us on Facebook or follow us on Twitter for more sports updates. You can also download the NDTV Cricket app for Android or iOS.