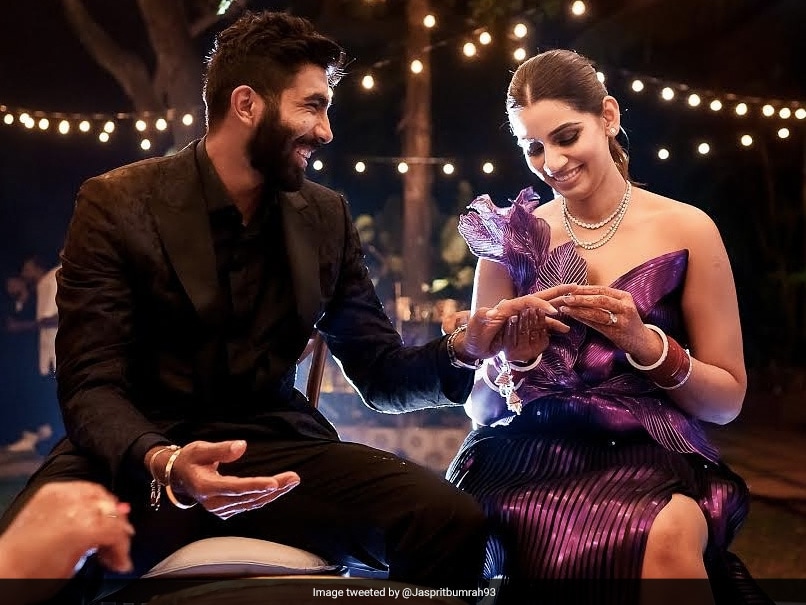 Jasprit Bumrah took to Twitter to wish his wife on their one-month wedding anniversary.Bumrah got married to TV presenter and his "best friend" Sanjana Ganesan last month. The fast bowler was granted leave by the BCCI for his marriage and he missed the white-ball series against England. Sharing a picture wife, Bumrah tweeted: "One month of love, belly laughs, silly jokes, long conversations and peace. One month of being married to my best friend". Bumrah is currently in Chennai with the Mumbai Indians squad where they are scheduled to play their first five league games.

One month of love, belly laughs, silly jokes, long conversations and peace. One month of being married to my best friend. pic.twitter.com/yraFiVTciM

Bumrah had shared a few pictures from his marriage on social media last month. "Love, if it finds you worthy, directs your course," Bumrah had tweeted last month, along with two pictures where he and Sanjana were seen performing wedding rituals.

"Steered by love, we have begun a new journey together," the tweet further said. "Today is one of the happiest days of our lives and we feel blessed to be able to share the news of our wedding and our joy with you," he added.

Bumrah, since making his international debut in 2016, has gone on to become one of the mainstays of India's fast bowling unit across formats. The fast bowler, with a unique action, has represented India in 19 Tests, 67 ODIs and 50 T20Is.

Bumrah also shoulders the responsibility of leading Mumbai Indians' fast bowling attack. He played a key role as Mumbai Indians defended their title and lifted the IPL trophy for the fifth time --  most by any other team.

In the 94 IPL matches, Bumrah has 111 wickets under his belt, of which 27 came in the last edition, which was held in the UAE. Bumrah is yet to hit the heights this season, managing only two wickets in first two outings.

Jasprit Bumrah Cricket
Get the latest updates on India vs South Africa and check out  Schedule, Results and Live Score. Like us on Facebook or follow us on Twitter for more sports updates. You can also download the NDTV Cricket app for Android or iOS.