Prithvi Shaw is the second youngest Indian after Sachin Tendulkar to score a Test century. 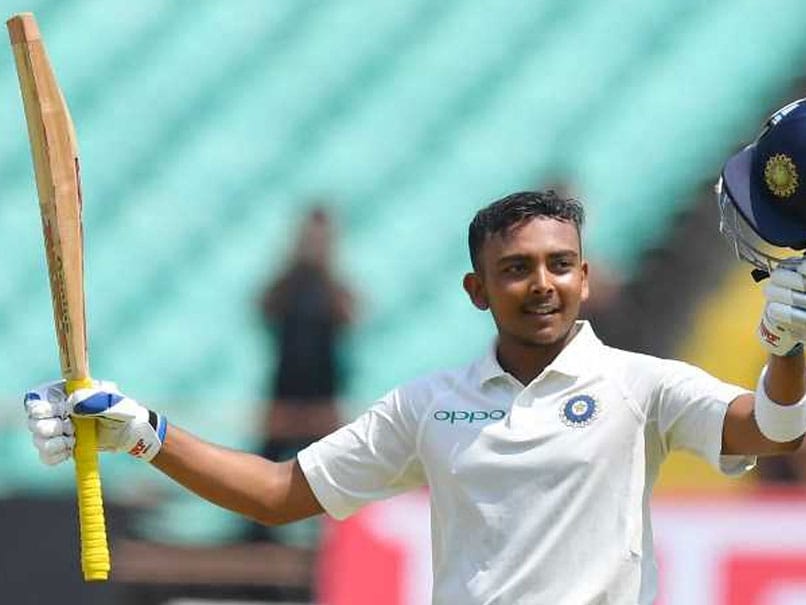 Prithvi Shaw made history on Thursday by becoming the youngest Indian to score a Test century on debut. Shaw, at 18 years and 329 days, reached the historic three-figure mark off just 99 balls against the Windies on Day 1 of the opening Test at the Saurashtra Cricket Association Stadium, Rajkot. The previous record for the youngest half-centurion for India on debut was held by Abbas Ali Baig, who at the age of 20 years 131 days, scored a half-century against England in Manchester in 1959.

Prithvi Shaw brings up his maiden Test ??. At 18 years 329 days, he has now become the youngest Indian to score a century on debut! ??

Meanwhile, Prithvi is also the third-fastest centurion on Test debut. India's southpaw Shikhar Dhawan remains the fastest in this club with an 85-ball hundred against Australia in 2013 at the IS Bindra Stadium, Mohali. And West Indian cricketer Dwayne Smith (93 deliveries) pulled off the same feat against South Africa in Cape Town in 2004.

Prithvi, however, has also become the seventh-youngest Test centurion. Back in 2001, Bangladesh's Mohammad Ashraful (17 years, 61 days) became the youngest ever to achieve this feat against Sri Lanka in Colombo. Next on the list is Pakistan's Mushtaq Mohammad (17 years, 78 days), who pulled this off back in 1961 against India in Delhi. Sachin Tendulkar (17 years, 78 days), Zimbabwe's Hamilton Masakadza (17 years, 352 days), Pakistan's Imran Nazir (18 years, 154 days) and Saleem Malik (18 years, 323 days) are the rest of the batsmen in this elite club.

India captain Virat Kohli won the toss and elected to bat on a pitch with a green tinge. India got off to a nightmare start, losing KL Rahul for a duck in the very first over of the match. However, Shaw and Cheteshwar Pujara made sure there were no more trouble for India with the duo batting brilliantly to take India to 133 for one at lunch on Day 1.

Sachin Tendulkar Mohammad Ashraful India vs West Indies 2018 India vs West Indies, 1st Test Cricket
Get the latest updates on ICC T20 Worldcup 2022 and CWG 2022 check out the Schedule, Live Score and Medals Tally. Like us on Facebook or follow us on Twitter for more sports updates. You can also download the NDTV Cricket app for Android or iOS.