India, who opted to bat, were 356 for three at stumps on Day 1 of the one-off Test against Bangladesh at the Rajiv Gandhi International Stadium on Thursday. 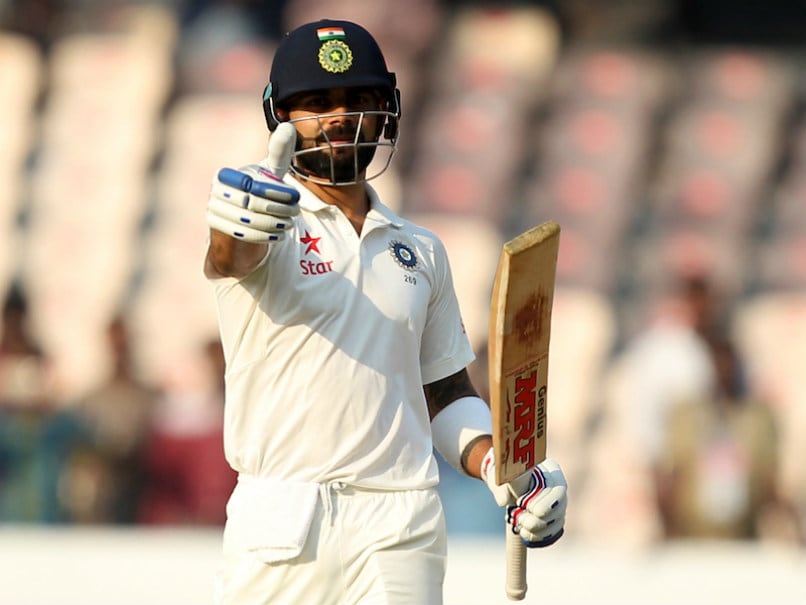 India took complete control of the one-off Test against Bangladesh thanks to centuries from skipper Virat Kohli and Murali Vijay on the opening day on Thursday. Kohli, who notched his 16th ton, was unbeaten on 111 at stumps while Vijay fell shortly after scoring his ninth century. For the visitors, Taskin Ahmed, Mehedi Hasan Miraz and Taijul Islam took one wicket apiece. Kohli continued his sensational run of form, stroking his way to yet another ton off just 130 balls. The hosts were 356 for three at the end of the day's play in Hyderabad.

The India captain now has a century against every team he has met in a Test match. Pakistan and Zimbabwe have so far been lucky enough to avoid a meeting with India's run machine.

Ajinkya Rahane, who was chosen ahead of triple-centurion Karun Nair, was unbeaten on 45 at stumps. Kohli and Rahane notched an 122-run unbeaten stand for the fourth wicket as India dominated play on the first day.

Vijay (108) too looked in great touch and was aided brilliantly by Cheteshwar Pujara (83).

Vijay and Pujara combined well to steady India's ship after the hosts lost opener KL Rahul (2) to Taskin Ahmed in the first over of the match.

Vijay reached the three-figure mark just after tea with skipper Kohli unbeaten on 31 at the time. Soon after reaching his ton, Vijay was clean bowled Taijul Islam.

Vijay showcased his full range of shots as Bangladesh players were left to ponder over what could have been. The Indian opener was given a massive reprieve in the 18th over when he was on 35. Mehedi Hasan had looked the likeliest to give Bangladesh their second breakthrough but Pujara-Vijay survived some close chances on his bowling.

But the Bangladeshi off-spinner had a golden chance to run out Vijay but fluffed his lines, failing to collect the ball and take down the stumps. Vijay, who was stranded in the middle of the pitch, made it back into the crease unharmed.

Vijay and Pujara have combined brilliantly in the past and their prolific run-scoring together once again put India in command in the only Test being played between these two sides. The Indian duo now have five century partnerships this season at home -- the most by any pair in an Indian season. Vijay Hazare and Rusi Modi had shared four such partnerships in 1948-49.

The last time India played a Test at this venue, Australia were the opponents in 2012-13, Vijay-Pujara had combined to add 370 runs and the duo's love affair with the venue continued as Bangladesh had to pay dearly for some shocking misses.

Earlier, opting to bat, India overcame the early setback of Rahul as Vijay-Pujara duo added 178 runs for the second wicket stand on a track that hardly had any assistance for the bowlers.

Rahul, whose scores hover between single and three digits in longer format was bowled, when he dragged a fuller delivery back onto his stumps from Taskin while attempting a cover drive.

The first boundary came in the sixth over bowled by Rabbi when Pujara opened the face of his bat to glide it past point region.