For Bangladesh, it is a historic moment as they are playing a Test match on Indian soil for the first time but for the hosts, it will be more about maintaining the momentum they have acquired by winning seven out of the eight matches against comparatively better sides like New Zealand and England. 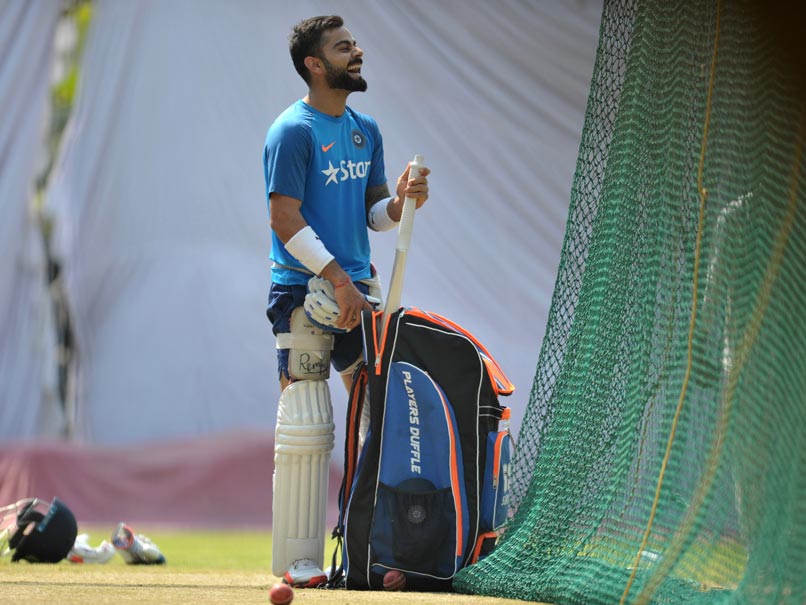 India vs Bangladesh: Virat Kohli has been in rich vein of form in Test cricket.© AFP

With a pool of high quality players in their ranks, formidable India are overwhelming favourites against Bangladesh in a proverbial 'David vs Goliath' one-off cricket Test that starts in Hyderabad on Thursday. On paper, it is the 'Battle of Unequals' with the world number one side taking on the ninth ranked team, but in this game of glorious uncertainties, rankings often go for a toss in the longest format.

For Bangladesh, it is a historic moment as they are playing a Test match on Indian soil for the first time but for the hosts, it will be more about maintaining the momentum they have acquired by winning seven out of the eight matches against comparatively better sides like New Zealand and England.

But when it comes to playing the game wearing whites flannels, Bangladesh have not been able to replicate their performances in white ball cricket in which they have been different beasts altogether.

That they have managed to lose a match against New Zealand as recently as last month, after scoring nearly 550 in the first innings, shows that even after 16 years in the five-day circuit, they have not been able to decode the winning formula.

The last time India played Bangladesh in a one-off Test at Fatullah, it was the rain God that came to the rescue of the 'Tigers' as their fans affectionately call them. Worse they don't have a bowler of Mustafizur Rahaman's calibre in the team, someone who knew this ground well enough.

All these statistical nuggets make India runaway favourites, and they would be aiming to close the deal within four days in what could turn out to be a pretty one-sided affair, considering the composition of the teams.

The Indian team does have its share of 'happy problems' as they have a number of players who can walk into the playing XI, but skipper Virat Kohli and coach Anil Kumble will have to tread the tricky path.

Comeback man Abhinav Mukund will have to wait unless something happens to two regular openers.

With the world's premier off-spinner Ravichandran Ashwin two short of becoming the fastest ever to reach 250 wickets and the deadly accurate Ravindra Jadeja for company, the likes of Tamim Iqbal, Soumya Sarkar or Mahmuddlah Riyadh won't exactly find any easy pickings.

In fact, the last time in Fatullah none of the Bangladeshi batsmen were able to read Ashwin. Not to forget the lively pace of Umesh Yadav and disconcerting bounce generated by Ishant Sharma.

The interesting part about India's home Tests this season has been that whether it is by choice or design, Kohli has had to change his playing XI most of the times.

Fun & games. Before the warm-up session, #TeamIndia indulged in a game that required them to pass the vortex ball to teammates. #INDvBAN pic.twitter.com/SufAzWxEeH

The XI for for Thursday will feature some forced changes -Wriddhiman Saha will be back behind the stumps replacing Parthiv Patel while Amit Mishra, who was in the playing in Chennai, is out with an injury.

His replacement Kuldeep Yadav is an exciting prospect but may have to wait a little longer to get a Test cap. Jayant Yadav, whose steady off-spin and good technique with the willow impressed one and all, is expected to get his place back.

Ishant and Umesh are certainly first choice new ball bowlers even though Bhuvneshwar Kumar, in limited chances, has done his case no harm.

Hardik Pandya gives the option of a seamer all-rounder but he could be considered more as a third seamer when one is playing with the SG Test ball rather than white kookaburra.

In case, Kohli fancies the option of picking Pandya, checking him out before the big-ticket series against Australia, it could be in the place vacated by Mishra.

For Kohli and his boys, the Test gives them an ideal opportunity to break a few more records against a bowling attack whose only quality international level bowler is Shakib Al Hasan.

Kohli, who has been in rich vein of form in Test cricket, will not mind a substantial score against the likes of Mehdi Hasan Miraz, Shafiul Islam and Taskin Ahmed.

For the Indian top-order, it will be an opportunity to devour on a bowling attack which is certainly not A grade in terms of Test cricket. As Sunil Gavaskar says 'Test match runs are Test match runs' and one should always make hay while the sun shines.

Ditto for KL Rahul, who would like to carry forward from his 199 in the final Test against England in Chennai. Murali Vijay will also be itching to bat against a bowling attack against which he had feasted on the last time, making 150. Not to forget that Vijay has a special fondness for this particular venue.

The last time he played a Test here back in 2013, he recorded his personal best score of 167 against Australia.

Pujara is an incredibly difficult batsman to bowl to on Indian pitches and if he crosses the 50-run mark, the only way possible to get him out is to wait for a mistake on the batsman's part.

And then comes the captain, the current show stopper in Indian cricket.

Bangladesh's strength will be their spinners Shakib Al Hasan and young Miraz, who made an impression against England on home soil.

But Miraz's real test will be against the likes of Vijay, Pujara and Kohli - three brilliant players of spin bowling, especially Vijay, who can take on the spinners anytime, anywhere.

Comments
Topics mentioned in this article
India Cricket Team Bangladesh Cricket Team Virat Kohli Rajiv Gandhi International Stadium, Hyderabad Cricket
Get the latest updates on ICC T20 Worldcup 2022 and CWG 2022 check out the Schedule, Live Score and Medals Tally. Like us on Facebook or follow us on Twitter for more sports updates. You can also download the NDTV Cricket app for Android or iOS.