ENG vs SA: Ollie Robinson returned his best England figures before South Africa hit back in the third and deciding Test at the Oval on Saturday 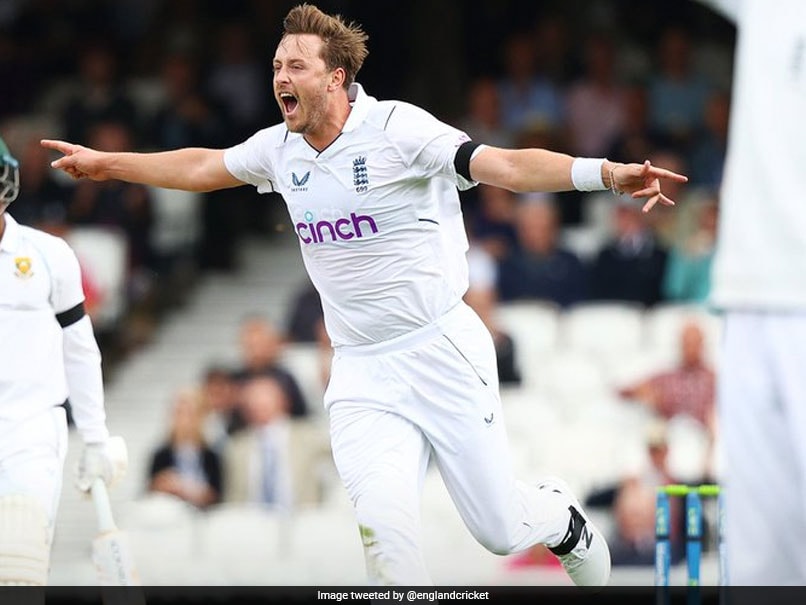 Ollie Robinson returned his best England figures before South Africa hit back in the third and deciding Test at the Oval on Saturday after cricket paid its respects to Britain's Queen Elizabeth II. Sussex seamer Robinson took 5-49 in 14 overs, his third five-wicket innings haul in 11 career Tests, as South Africa were dismissed for just 118. Veteran quick Stuart Broad enjoyed a return of 4-41. Yet an extraordinary third day -- but the first active one in the game -- finished with England 154-7, a lead of just 36 runs.

South Africa left-arm quick Marco Jansen, who had top-scored with 30 in the Proteas' meagre total after he was unluckily left out of the second Test, removed England's top four as he took 4-34 in 11 overs.

Then fast bowler Kagiso Rabada captured the key wicket of Ollie Pope, who fell for 67 on his Surrey home ground.

Pope fenced at a good-length ball outside off stump and was caught behind -- to his evident disgust -- as a sparkling 77-ball innings featuring 52 runs in boundaries ended in tame fashion.

Surrey and England wicketkeeper Ben Foakes, fresh from his unbeaten hundred in the second Test at Old Trafford, was 11 not out. Robinson was unbeaten on three when bad light ended play just over half an hour before the scheduled 1800 GMT close even though the floodlights were on.

The opening day was washed out without a ball bowled and there was no play on Friday following the death of Britain's longest-serving monarch on Thursday, leaving three days.

Stokes had won the toss on Thursday and opted to bowl first and Saturday's overcast conditions favoured the bowlers.

After a minute's silence in memory of the Queen, with the first rendition at a major sporting event in the reign of Charles III of 'God Save the King', South Africa's longstanding top-order problems again became apparent.

South Africa captain Dean Elgar, his team's most experienced batsman, was bowled between bat and pad for just one by a fine Robinson delivery.

England great James Anderson then had Sarel Erwee, Elgar's opening partner, caught behind for a duck, with South Africa slumping to 32-5 in the first hour.

But Khaya Zondo, in his first Test innings, responded to a desperate situation by lofting spinner Jack Leach for six.

Zondo, however, was out for 23 in the first over after lunch, fending at a lifting Broad delivery

Jansen was dropped twice in one Broad over before edging to Joe Root at first slip.

England have had their own batting problems and the towering Jansen removed the struggling opening pair of Alex Lees (13), bowled between bat and pad, and Zak Crawley (five), lbw to an inswinger.

The hosts' 84-2 at tea soon became 84-3 when Root, chasing a wide Jansen delivery, was brilliantly caught by Keegan Petersen at third slip for 23 -- the star batsman's first double-figure score of the series.

Brook, a team-mate of Root at Yorkshire, got off the mark in style by cover-driving Jansen for four before rain stopped play for 30 minutes. The 23-year-old had not added to his score of 12 when he carelessly hoisted Jansen to Rabada at long leg.

Stokes, having nearly holed out on five, fell for six when he edged an extravagant drive off fast bowler Anrich Nortje to first slip.

South Africa Cricket Team Marco Jansen Ollie Robinson Ollie Pope England vs South Africa, 3rd Test Cricket
Get the latest updates on Fifa Worldcup 2022 and check out  Fifa World Cup Schedule, Stats and Live Cricket Score. Like us on Facebook or follow us on Twitter for more sports updates. You can also download the NDTV Cricket app for Android or iOS.