BCCI president Sourav Ganguly was mighty impressed by Zak Crawley's batting in the ongoing third Test against Pakistan, where he scored his maiden Test double hundred. 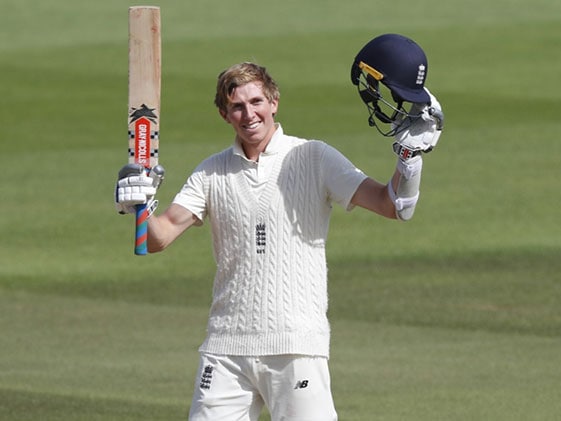 Board of Control for Cricket in India (BCCI) president Sourav Gangulysaid England have found a "very good" number three batsman in Zak Crawley, hoping that he will play for England in all formats regularly. Taking to Twitter former India skipper wrote, "England have found a very good no 3 in Crawley.. looks a class player .. hope to see him in all formats regularly @nassercricket @ECB_cricket."

Crawley and Jos Buttler played knocks of 267 and 152 respectively to put England in a dominating position in the third and final Test.

The hosts declared their first innings after going past the 580-run mark and after which, Pakistan ended day two at 24/3, trailing England by 559 runs.

Earlier, resuming day two at 332/4, Buttler and Crawley piled on the misery on the visitors and the duo ensured that England do not lose any wickets in the first session.

In the first session, only 18 overs were bowled due to rain. In the second session, Buttler and Crawley started from where they left off and en route, Crawley registered his first double ton in Test cricket.

Both batsmen put on 359 runs for the fifth wicket, which is also England's highest fifth-wicket partnership in Test cricket.

The duo's vigil at the crease was finally ended by Asad Shafiq in the 133rd over, as he dismissed Crawley (267), reducing England to 486/5.

Buttler and Chris Woakes ensured that the side does not lose more wickets before the tea break, and England went into the interval at 490/5.

After the interval, Woakes scored some quick runs, while Buttler (152) was sent back to the pavilion by Fawad Alam in the 145th over. Woakes (40) was also dismissed by Alam, reducing England to 547/7.

England finally declared their innings at 583/8 with Dom Bess unbeaten on 27.

The Rose Bowl, Southampton Sourav Ganguly Cricket England vs Pakistan, 3rd Test
Get the latest updates on T20 World Cup, check out the T20 World Cup Schedule and Live Score . Like us on Facebook or follow us on Twitter for more sports updates. You can also download the NDTV Cricket app for Android or iOS.