Zak Crawley struck his maiden Test century as England established a strong position on the opening day of their series finale against Pakistan at Southampton on Friday. 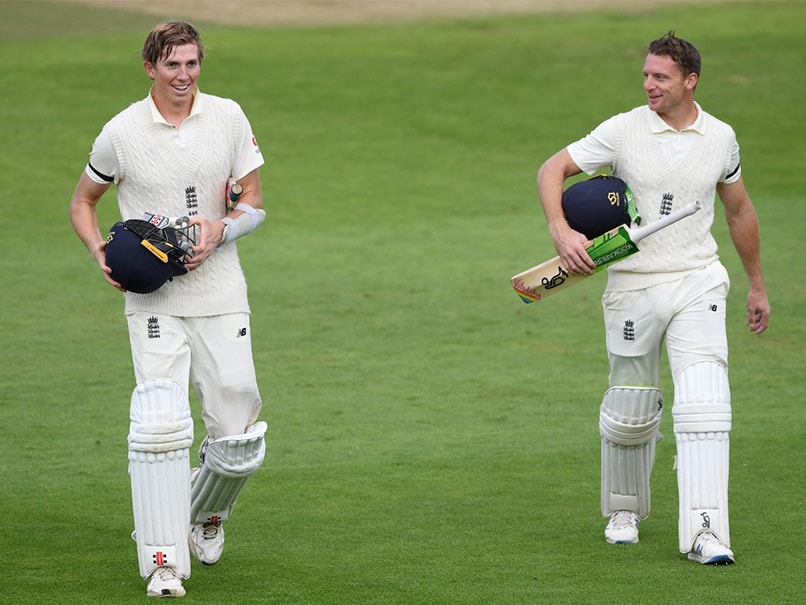 Zak Crawley and Jos Buttler put on an unbeaten stand of 205 runs on Day 1 of the third Test.© AFP

Zak Crawley struck his maiden Test century as England established a strong position on the opening day of their series finale against Pakistan at Southampton on Friday. Crawley's commanding 171 not out was the centrepiece of England's 332-4 at stumps after captain Joe Root won the toss. Jos Buttler (87 not out) proved a fine, free-scoring ally to Crawley during an unbroken stand of 205. Crawley came in with England struggling at 12-1 following the loss of Rory Burns. But the 22-year-old Kent batsman, in just his eighth Test, got off the mark with a boundary and rarely looked troubled during what was just the fourth first-class century, and highest score, of his career. England, 1-0 up in a three-match contest, will win their first Test series against Pakistan in 10 years if they avoid defeat at the Ageas Bowl.

With Pakistan playing just four frontline bowlers, there was pressure on leg-spinner Yasir Shah to give captain Azhar Ali a degree of control, even though a first-day pitch rarely favours slow bowlers.

But Buttler counter-attacked by lofting Yasir for two sixes in three balls and at stumps his figures were 2-107 from 28 overs.

Crawley reverse-swept Yasir for four on the way to a third fifty in just 62 balls.

After Root won the toss on a blustery morning, with the sun trying to break through, Burns (six) nicked a fine delivery from Shaheen Afridi that moved away late low to Shan Masood at fourth slip.

Crawley, fresh from his 53 in the drawn second Test at Southampton, a match marred by bad weather, cut Yasir for four and glanced fast bowler Naseem Shahfor another boundary.

But a second-wicket partnership of 61 ended when Dom Sibley was lbw to Yasir for 22.

Crawley brought up an 80-ball fifty off the last ball of the session when, tempted to drive after Pakistan reinforced the slip cordon, he struck left-arm quick Afridi to the long-off rope for a stylish four .

England, however, lost two wickets early in the second session to be 127-4.

There was little Root could do on 29 when a full-length delivery from teenage paceman Naseem seamed away late to take the outside edge, with wicketkeeper Mohammad Rizwan holding a fine diving catch.

Ollie Pope was then once again undone by Yasir's quicker delivery when clean bowled for three hanging back in the crease.

Crawley, whose previous Test-best was the 76 he made against the West Indies at Southampton last month, had to spend the 20-minute tea interval on 97 not out.

But if there were any nerves they did not show, with Crawley having said during the second Test: "I think about scoring a hundred in my room at night. I massively want it for England. But I don't want to put myself under pressure. That could create too much pressure as I get closer."

His team-mates, in a season of Tests being played behind closed doors because of the coronavirus pandemic, tried to compensate for the lack of any fans at the Ageas Bowl with enthusiastic applause from the dressing room.

He followed fellow 22-year-old Pope and the 24-year-old Sibley as the latest young England batsman to have made a Test century.

Pakistan took the new ball with England 288-4 off 80 overs before Buttler's cover-driven four off Naseem in Friday's last over raised a 200 stand with Crawley.

Yasir Shah Cricket England vs Pakistan, 3rd Test
Get the latest updates on IPL Auction 2023 and check out  IPL 2023 and Live Cricket Score. Like us on Facebook or follow us on Twitter for more sports updates. You can also download the NDTV Cricket app for Android or iOS.