With sports at a complete standstill, David Warner has found a new way of keeping his fans entertained during the coronavirus lockdown. 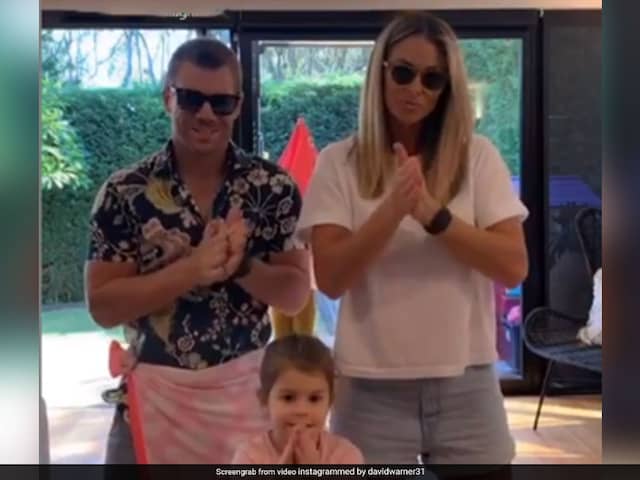 David Warner posted a video on Instagram in which he can be seen dancing to a Tamil song.© Instagram

David Warner has been quite active on social media during the forced break due to the coronavirus pandemic. The Australian opener recently forayed into the world of TikTok and took social media by storm with his funny videos, featuring his wife Candice and daughter Indi. The 33-year-old batsman took to Instagram on Saturday to share a video him dancing to a Tamil song with his wife and daughter. In the video, Warner and Candice can be seen grooving to a Tamil Song. "We are back again!! #challenge #family #boredinthehouse #isolation @candywarner1," Warner captioned the video.

Fans, especially from South India, could not get enough of the video.

"Daviddddd u r just another level," another fan said.

"Only cricketer makes me smile during these hard times... Love your family," another fan added.

On Friday, Warner caught up with Rohit Sharma and the duo talked about various topics such as the Indian Premier League (IPL), future of cricket post lockdown and the possibility of T20 World Cup going ahead as scheduled.

Warner told Rohit that by the looks of the current situation in Australia, he doesn't feel that the World Cup will go ahead in October.

The left-handed batsman also said that it will be bizarre to play in empty stadiums.

Interestingly, Warner was part of the only international cricket match that took place behind closed doors.

Australia hosted New Zealand for an One-Day International which was played in an empty stadium.

Speaking on resuming cricket behind closed doors, India captain Virat Kohli had also voiced his opinion and said that the players won't be able to feel the same atmosphere as they do when they play in front of a packed house.

Warner would have been busy leading the SunRisers Hyderabad in the 13th edition of the IPL but the Board of Control for Cricket in India (BCCI) postponed the lucrative league indefinitely due to the coronavirus pandemic.