BBL: Glenn Maxwell used a fire extinguisher to stop the bushfire from spreading ahead of his team Melbourne Stars' match against Hobart Hurricanes. 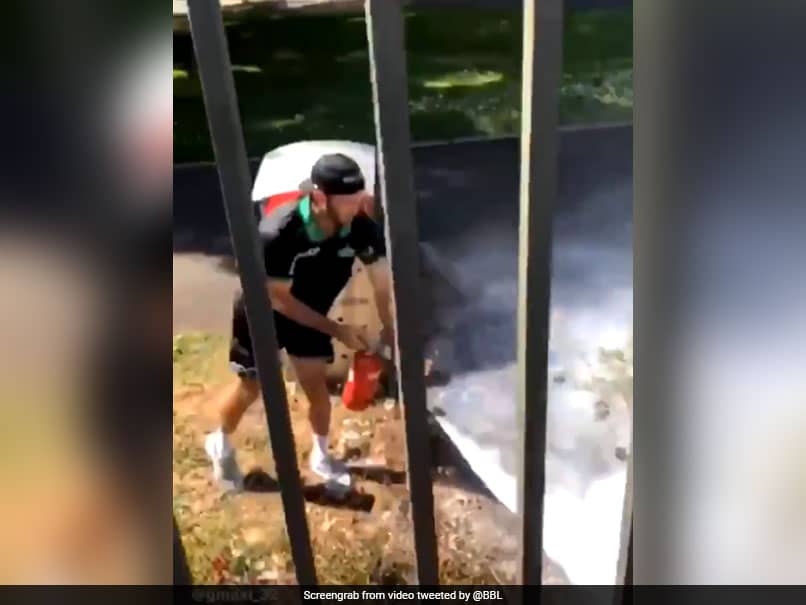 Glenn Maxwell, ahead of his team Melbourne Stars' match against Hobart Hurricanes in the Big Bash League (BBL), began his preparation in a quite unusual manner. Before the match, Glenn Maxwell showed his another set of skills as he used a fire extinguisher to stop the bushfire from spreading. Former South Africa fast bowler Dale Steyn filmed his skipper's swift reaction on camera and shared it on his Instagram story. Sharing the video of the incident, the BBL tweeted: "Via the Instagram story of @DaleSteyn62: Glenn Maxwell to the rescue! The @StarsBBL skipper had a bizarre pre-game interruption in Launceston #BBL09".

Via the Instagram story of @DaleSteyn62: Glenn Maxwell to the rescue! The @StarsBBL skipper had a bizarre pre-game interruption in Launceston #BBL09 pic.twitter.com/uN0PZ82UVl

Talking about the match, Melbourne Stars skipper Maxwell won the toss and opted to bat in a rain-curtailed game.

Making full use of the overcast conditions, Melbourne Stars bowlers made the run-scoring quite difficult.

For Melbourne Stars, Dale Steyn and Natahn Coulter-Nile picked up two wicket apiece which helped them reduce Hobart to 69 for five in their stipulated 11 overs.

Chasing a DLS revised target of 80 runs in 11 overs, Melboure Stars lost two early wickets in the first over itself.

However, opener Marcus Stoinis and wicket-keeper batsman Peter Handscomb added 53 runs for the third wicket and kept their side ahead on the DLS par score.

After Stoinis got out on the second ball of the eighth over, rain returned once again after just one ball and this time it forced the umpires to call it a game.

When the play was finally stopped, Handscomb was unbeaten on 22 while Maxwell was yet to open his account and Melbourne Stars were ahead on the DLS par score by four runs.

Coulter-Nile, who returned figures of 2 for 14 in his two overs, was adjudged the player of the match.

With this win, Melbourne Stars climbed to the second spot, while Hobart Hurricanes after the loss remained static on the fifth position in the points table.