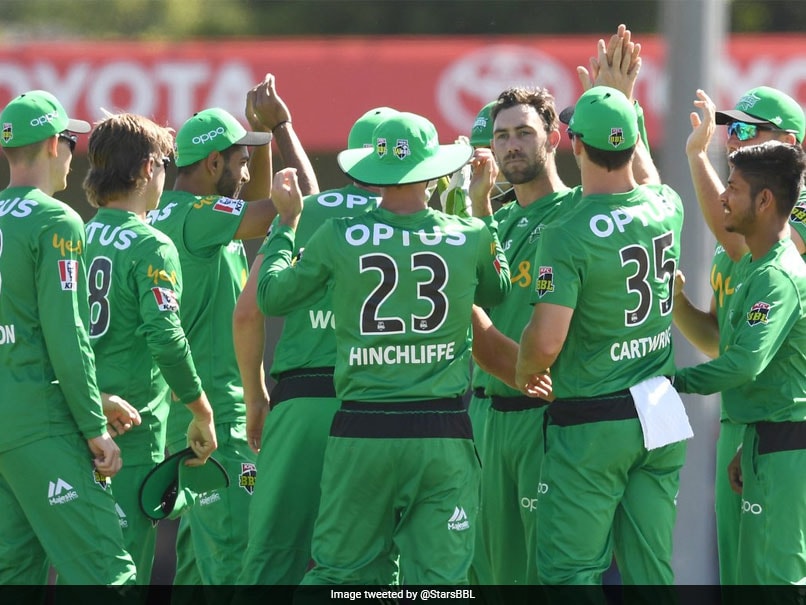 A mic'd up Peter Handscomb got his wish behind the stumps as Glenn Maxwell removed D Arcy Short.© Twitter

Players being mic'd during a live match and speaking to commentators has added a new dimension to cricket. Many hilarious incidents have been caught on tape when a player has been mic'd up. Something similar took place during the Big Bash League (BBL) when the Hobart Hurricanes took on Melbourne Stars at the Ted Summerton Reserve, Moe, Victoria on Sunday. Early into Hurricanes' chase, wicketkeeper Peter Handscomb was mic'd up, and while speaking to the commentators live, he hoped that Glenn Maxwell strikes with his next delivery. Incredibly, Maxwell did just that as D Arcy Short tried to pull a flattish delivery but only managed to find the fielder inside the ring on the leg-side.

"I think we just bowl spin in the powerplay depending on the matchups, so the two lefties are still here. I would have thought Maxi (Maxwell) keeps going. If he can get Shorty (D Arcy Short) out this ball, it would be nice," Handscomb said while speaking live to the commentators.

"You would not belive it," came a commentator's response.

A mic'd up Peter Handscomb get his wish behind the stumps.

In the match, Melbourne Stars had won the toss and elected to bat. They got off to a brilliant start courtesy Nic Maddinson and Marcus Stoinis. The duo put on 81 runs for the opening wicket as

Maddinson scored a 39-ball 40 while Stoinis remained unbeaten on 81 off 54 balls.

However, the Melbourne Stars failed to kick on from their great start with Ben Dunk (19), Maxwell (2) and Handscomb (3) all falling cheaply.

Stoinis did manage to hit some lusty blows towards the end to help his team post 163 for four in 20 overs.

In reply, the Hobart Hurricanes kept losing wickets at regular intervals with Pakistan pacer Haris Rauf taking a fifer to give Melbourne Stars an easy victory.

Glenn Maxwell D'Arcy Short Cricket
Get the latest updates on ICC T20 Worldcup 2022, check out the Schedule and Live Score. Like us on Facebook or follow us on Twitter for more sports updates. You can also download the NDTV Cricket app for Android or iOS.