BBL: Jhye Richardson, in an attempt to outsmart the batsman, ended up bowling wide of the pitch but Sam Harper was determined to get bat on ball. 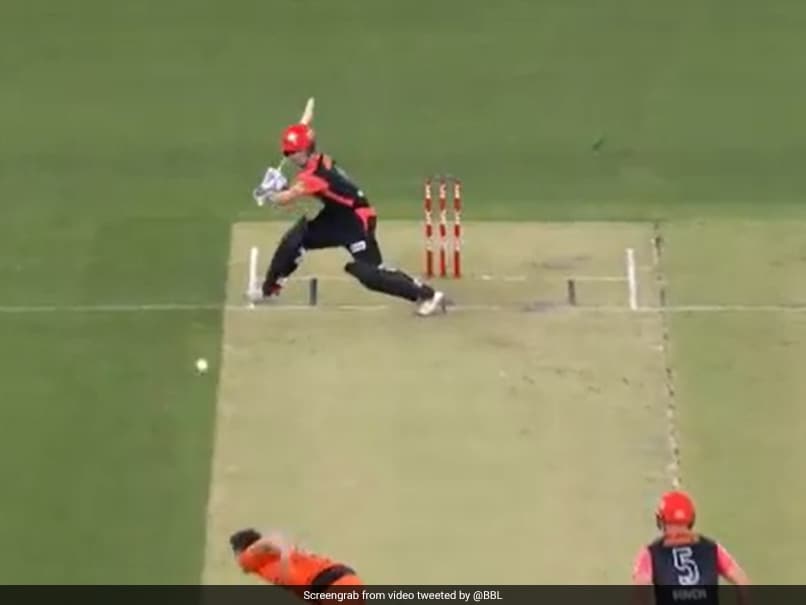 BBL: Melbourne Renegades' Sam Harper made a last-minute improvisation to get his shot away.© Twitter

The Big Bash League (BBL) rarely fails to entertain, with matches throwing up thrilling finishes, flashes of individual brilliance and on occasion, moments that are just bizarre. One such instance came up in the match between the Perth Scorchers and Melbourne Renegades on Saturday. The Renegades were in the fourth over of their chase and seamer Jhye Richardson was bowling to opener Sam Harper. As Richardson ran in, Harper tried to shuffle across the stumps to ramp it, as he had unsuccessfully tried in the previous delivery. Richardson saw the batsman move and decided to follow him and bowl it wide. It was good observation and awareness on the bowler's part, except he went too wide.

Richardson's slower delivery landed on the grass outside the pitch, and continued to go away from the batsman. Harper, not willing to give up on the delivery, made a last-minute alteration to his plan as well, stretching to cut the ball, but only managed to get it to the fielder at backward point.

Doesn't even matter if it lands on the cut stuff. Sam Harper just wants to get bat on ball!

Twitter users were left confused about the legality of the delivery, questioning why it was not given a no-ball.

"That should've been a no ball, right?" one user asked.

"No ball?" another enquired.

"We used to give it a no ball,did they??" wrote another.

According to the Marylebone Cricket Club (MCC), who are the custodians of the laws that govern cricket, if a delivery pitches wholly or partially off the pitch before it reaches the line of the striker's wicket, it is a no-ball.

The match ended in a win for Perth Scorchers, as the Renegades fell 11 runs short of the Scorchers' 197. The match also saw a stunning catch in the deep by Chris Jordan.

Comments
Topics mentioned in this article
Jhye Richardson Cricket
Get the latest updates on ICC T20 Worldcup 2022 and CWG 2022 check out the Schedule, Live Score and Medals Tally. Like us on Facebook or follow us on Twitter for more sports updates. You can also download the NDTV Cricket app for Android or iOS.