Chris Jordan leaped, diving to his right at long-on and took a catch to snaffle up dangerous Daniel Christian for a duck. 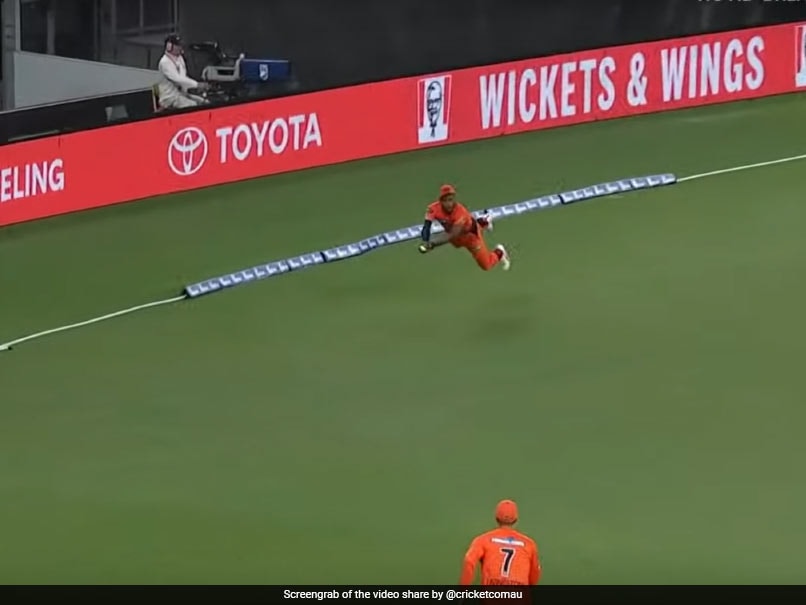 Chris Jordan's brilliant effort at the boundary line was the highlight of Perth Scorchers' win.© Screengrab of the video share by @cricketcomau

Chris Jordan, the fast bowler from England who has featured in majority of T20 leagues in the world, has a habit of pulling off some sensational catches. Jordan was at it again during the Big Bash Leagueclash between Perth Scorchers and Melbourne Renegades at the Optus stadium in Perth on Saturday. On the penultimate delivery of the 18th over in Melbourne Renegades' chase, Daniel Christian hit the ball hard as it raced to long-on's right in no time. The Indian Premier League franchise Kings XI Punjab's new recruit had some ground to cover but he did not give up. Jordan leaped, diving to his right and took a catch to snaffle up dangerous Christian for a duck.

Jordan's odd blinder not only ended Christian's stay, it ended the Renegades' slim hopes of winning the contest too.

Chris Jordan, ARE YOU KIDDING ME!!! #BBL09 pic.twitter.com/kZZf2yMWxF

Find someone who will hold on to you the way Chris Jordan holds on to a cricket ball. pic.twitter.com/98AmhpXPgp

Chris Jordan is a mad fielder. One of the bestpic.twitter.com/EiGp9QfubX

Kane Richardson was the star bowler for the visitors as he claimed four wickets for 22 runs.

In reply, openers Sam Harper and Aaron Finch gave an explosive start to Melbourne Renegades before the skipper was removed in the 5th over by Chris Jordan.

Eventually, Melbourne Renegades fell short by 11 runs and Mitchell Marsh was adjudged the man of the match for his explosive innings.

Shaun Marsh
Get the latest updates on Fifa Worldcup 2022 and check out  Fifa World Cup Schedule, Stats and Live Cricket Score. Like us on Facebook or follow us on Twitter for more sports updates. You can also download the NDTV Cricket app for Android or iOS.