The Big Bash League in Australia has got off with action heating up at various venues. 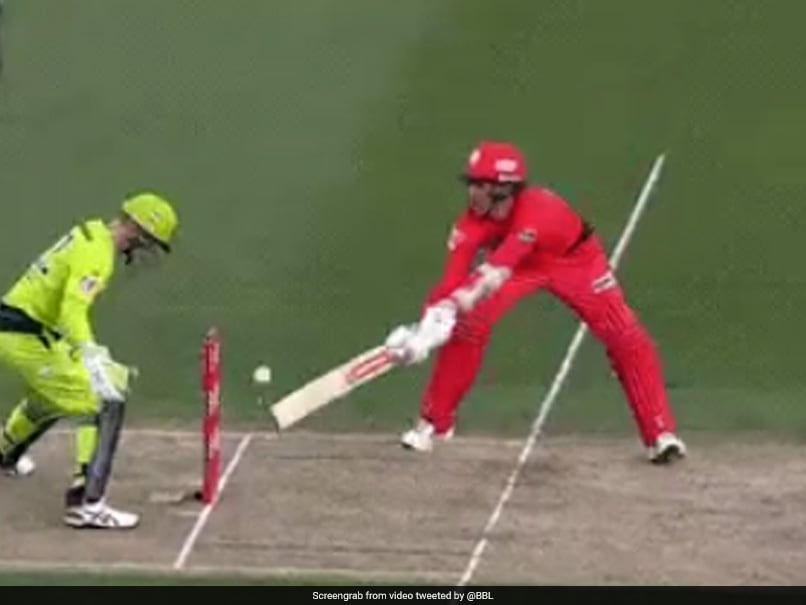 The Big Bash League (BBL), since its inception in 2011, has gone on to become the second-most popular Twenty20 League in the world, with the Indian Premier League (IPL) taking the top spot. What makes these T20 leagues so much popular among the fans is the commitment of the players involved. One such incident occurred in the ongoing BBL 2019-20 when Australia's Tom Cooper, playing for Melbourne Renegades, showed great game awareness to save his wicket. Cooper, after coming in to bat at No. 4, tried to smash the ball way too hard but mistimed it completely. The ball after hitting the bottom of the bat was heading towards the wicket but Cooper reacted swiftly and stopped it using his bat.

Phew. Handy little save there from Tom Cooper #BBL09 pic.twitter.com/U6egBaTn3v

Copper, however, couldn't extend his innings further than 13 runs, scored off 17 balls, as he was dismissed by Nathan McAndrew in the 14th over.

Melbourne Renegades, despite the ordinary show from their lower-order batsmen, posted 169/5, setting a challenging target for Sydney Thunder.

Melbourne Renegades opener Sam Harper and skipper Aaron Finch gave their side a flying start as they added 55 runs in first five overs. Harper scored a quick-fire 39 runs off just 19 balls, with the help of six boundaries, including two sixes.

Finch batted cautiously scoring 29 runs from 22 balls. Shaun Marsh, who came into bat at No. 3, top-scored for his side as he smashed 42 runs off 33 balls.

Beau Webster (17 off 10 balls) also chipped in with some crucial runs towards the end of the innings.

For Sydney, Daniel Sams and Arjun Nair were the pick of the bowlers as they effected two dismissals each, while Nathan McAndrew claimed one wicket.

Shaun Marsh
Get the latest updates on India vs Australia and check out  Schedule, Results and Live Score. Like us on Facebook or follow us on Twitter for more sports updates. You can also download the NDTV Cricket app for Android or iOS.