Batsman Does A 'Yuvraj Singh', Hits 6 Sixes In An Over In New Zealand T20 League. Watch Video

Canterbury Kings' Leo Carter put on a show, smashing spinner Anton Devcich for six sixes in an over. 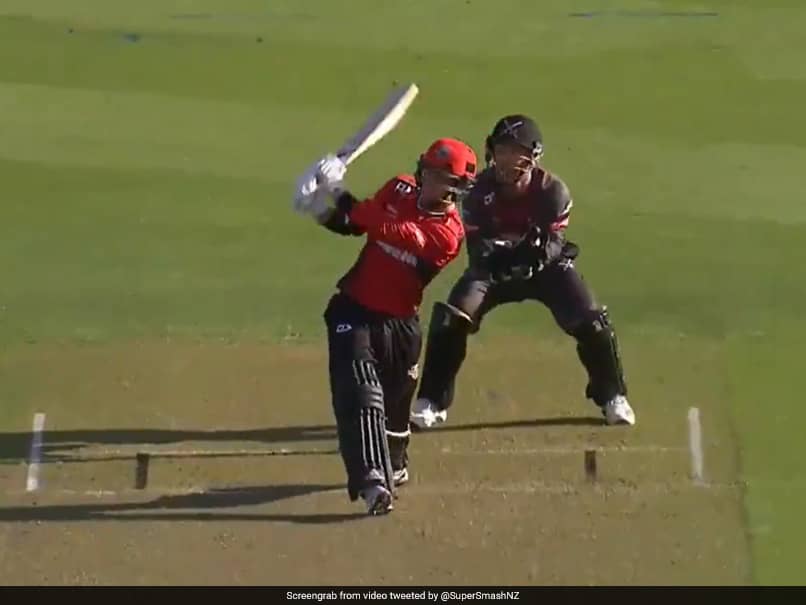 Leo Carter smashed 70 runs off 29 deliveries to steer his team to victory.© Twitter

A left-handed batsman smashing six sixes in an over immediately brings to mind Yuvraj Singh and that match against England in the 2007 World T20, but New Zealand batsman Leo Carter on Sunday emulated the former India batsman in New Zealand's Super Smash T20 league. In the 16th over of the match between Carter's team Canterbury Kings and Northern Knights, the batsman ripped into spinner Anton Devcich, sending every delivery of the over flying over the ropes on the leg side.

Leo Carter hit 6 sixes in a row and the @CanterburyCrick Kings have pulled off the huge chase of 220 with 7 balls to spare at Hagley Oval!

The Northern Knights set a daunting target of 220 for the Kings to chase. They were down to 104/3 when Leo Carter walked in to bat in the 11th over. By the end of the 15th over, Carter had gotten off to a watchful start, scoring 11 off 12 deliveries as he let his partner Cole McConchie do most of the hitting.

McConchie hit 43 off 19 deliveries, with the Canterbury Kings taking the score to 156 by that point.

From then on in, it was all Carter.

The first ball was bowled on leg stump and Carter swivelled around to hammer it behind square leg to get the over started. The next delivery - a juicy full toss - was given the treatment it deserved, sent flying over mid-wicket.

The left-arm spinner tossed the third ball full on off-stump but the result was the same, with Carter smashing it over the hapless fielder on the mid-wicket boundary.

Devcich changed sides for the next delivery, going over the wicket, but it made no difference to a fired up Carter, who this time picked the square leg fence.

Going back to bowling around the wicket, the pressure on Devcich was visible as he lobbed up another full toss. This time, the southpaw went more straight, sending the ball flying over the fielder at long-on.

Devcich bowled it on leg again for the final delivery and this time Carter produced a fine flick over the square leg boundary to complete a perfect over.

McConchie added only six more runs to his score as Carter took charge for the remainder of the chase. He finished with 70 runs off 29 deliveries, hitting the winning boundary off the penultimate delivery of the 19th over as Canterbury completed a difficult chase with seven balls to spare.

Apart from Carter and Yuvraj Singh, the only other players to hit six sixes in T20s are Ross Whitely for Worcestershire in the Vitality Blast and Hazratullah Zazai in the Afghanistan Premier League.

Herschelle Gibbs also hit six sixes in an over for South Africa in an ODI while Sir Garry Sobers and Ravi Shastri have achieved the feat in first-class cricket.