Josh Hazlewood got one to move away from Alex Hales, who got a thick outside edge, resulting in a simple catch at slip 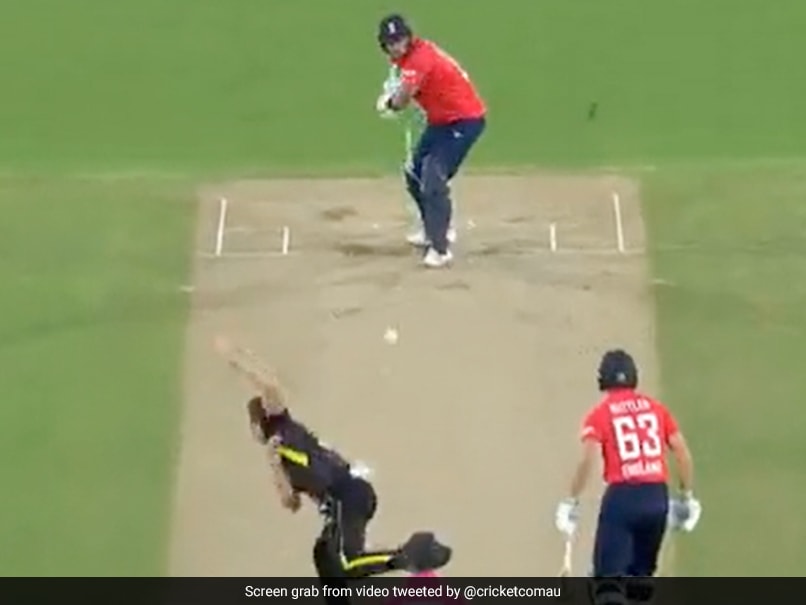 Nathan Lyon, who was commentating the game, predicted Hales' dismissal on air.© Twitter

Australia and England are currently squaring off in the third and final T20I in Manuka Oval, which is a dress rehearsal for the upcoming T20 World Cup Down Under. England lead the series 2-0, and were put into bat by Australia. However, it didn't exactly go as planned for the visitors as in-form opening batter Alex Hales wad dismissed on a duck by Josh Hazlewood in the second over. Hazlewood got one to move away from Hales, who got a thick outside edge, resulting in a simple catch at slip.

"The ball is moving a little it. If he shape the ball a little bit away, maybe he can get an outside edge," Lyon was heard as saying on air.

England captain Jos Buttler smashed 65 from 41 balls as England reached 112-2 in 12 overs as rain caused havoc in the third T20 against Australia in Canberra on Friday.

Australia, already 2-0 down in the three-match series, will need 130 to win based on the Duckworth-Lewis method.

Buttler and Dawid Malan looked comfortable and after a slow start began to accelerate, but shortly after the first rain delay Malan miscued an attempted slog off Pat Cummins and was caught at mid-off by Mitchell Marsh for 23.

A second rain delay saw the match shortened to 12 overs each, and Buttler came out firing, blasting 22 runs off the 11th over.

Josh Hazlewood Australia vs England, 3rd T20I Cricket
Get the latest updates on Fifa Worldcup 2022 and check out  Fifa World Cup Schedule, Stats and Live Cricket Score. Like us on Facebook or follow us on Twitter for more sports updates. You can also download the NDTV Cricket app for Android or iOS.