Anand Mahindra Gifts T Natarajan A Vehicle, Gets A 'Treasure' In Return

Business magnate Anand Mahindra was thrilled to get a treasured gift from India pacer T. Natarajan after gifting the bowler with a new vehicle. 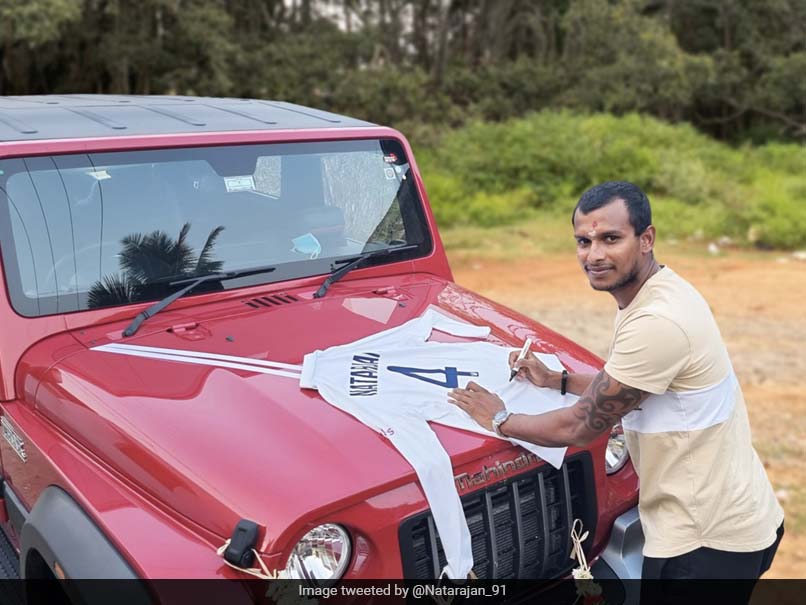 Anand Mahindra was thrilled with the "return gift" he got after presenting India pacer T. Natarajan with a Mahindra Thar as the former got a jersey signed by the rising star. Mahindra, who gifted India's new pace discovery Natarajan with a new vehicle and got a valuable return gift - the jersey that the left-arm bowler wore during the historic Brisbane Test against Australia in January this year. Thrilled at having received the present, the businessman wrote, "Thank you Nattu. I will treasure the return present and wear it with pride."

Thank you Nattu. I will treasure the return present & wear it with pride... @Natarajan_91 https://t.co/KxciWdQ1ai

Mahindra's post was in response to a two-part tweet put out by Natarajan on Thursday. "As I drive the beautiful Mahindra Thar home today, I feel immense gratitude towards Shri Anand Mahindra for recognising my journey & for his appreciation. I trust sir, that given your love for cricket, you will find this signed shirt of mine from the #Gabba Test, meaningful."

As I drive the beautiful @Mahindra_Thar home today, I feel immense gratitude towards Shri @anandmahindra for recognising my journey & for his appreciation. I trust sir, that given your love for cricket, you will find this signed shirt of mine from the #Gabba Test, meaningful 2/2

Natarajan's rise has been impressive. In the Indian Premier League (IPL) 2020, playing for SunRisers Hyderabad (SRH), he earned a lot of praise for his accuracy, especially in the death overs.

His performance in the IPL got him his maiden India call-up for the tour of Australia last year. Multiple injuries in the squad opened a window of opportunity for Natarajan, and he got to play all three formats, impressing one and all.

Applauding the pacer's performance and that of five other youngsters -- Shardul Thakur, Mohammed Siraj, Shubman Gill, Navdeep Saini and Washington Sundar -- during the tour Down Under, Anand Mahindra had announced that he would gift each of them a Thar.

India Cricket Team T Natarajan India vs Australia 2020 India vs England 2020-21 Cricket
Get the latest updates on ICC T20 Worldcup 2022 and CWG 2022 check out the Schedule, Live Score and Medals Tally. Like us on Facebook or follow us on Twitter for more sports updates. You can also download the NDTV Cricket app for Android or iOS.