Anand Mahindra hailed Team India's young brigade following their heroics in the recently-concluded Test series in Australia, and had a special surprise for them. 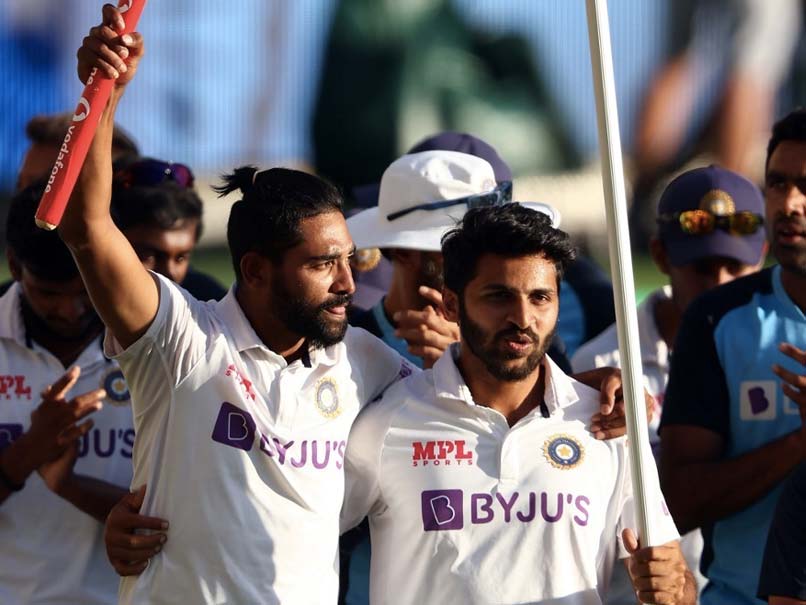 Mohammed Siraj and Shardul Thakur were the standout performers for India in Australia Test series.© AFP

Team India players, after scripting one of the most memorable overseas wins in the recent Test series in Australia, received a rousing receptionas they returned home from Down Under. India were forced to make lots of changes in their playing XI throughout the four-match series due to injuries and unavailability of players. The Test series saw the visitors handing debuts to as many as five players. Despite the constant chopping and changing in the XI and fielding an inexperienced side, India managed to win the series 2-1. On Saturday, Anand Mahindra took to Twitter to announce that he will gift six SUVs to the Indian cricketers who played their first Test in Australia and stood up to challenge.

Six young men made their debuts in the recent historic series #INDvAUS (Shardul's 1 earlier appearance was short-lived due to injury)They've made it possible for future generations of youth in India to dream & Explore the Impossible (1/3) pic.twitter.com/XHV7sg5ebr

Theirs are true 'Rise' stories; overcoming daunting odds in the pursuit of excellence. They serve as an inspiration in all arenas of life. It gives me great personal pleasure to gift each of these debutants an All New THAR SUV on my own account-at no expense to the company. (2/3) pic.twitter.com/5aiHSbOAl1

The reason for this gift is to exhort young people to believe in themselves & 'Take the road less traveled.' Bravo Mohammed, Shardul, Shubhman,Natarajan,Navdeep & Washington! I now plead with @Mahindra_Auto to get them their THARS on priority. (3/3)

In the Test series, Siraj was the leading wicket-taker for India, picking up 13 wickets in three matches.

Shardul and Washington played a key role with both the bat and ball in the final Test in Brisbane as India ended Australia's 32-year-old unbeaten run at the Gabba.

Both players with their 123-run stand for the seventh wicket, broke a 30-year-old record for Indiain Test cricket.

In the same match, Natarajan was the pick of the bowlers for the visitors in the first innings, returning with figures of three for 78.

Australia Cricket Team Shardul Thakur Navdeep Saini Mohammed Siraj T Natarajan Washington Sundar Shubman Gill Australia vs India 2020-21 Cricket
Get the latest updates on IPL Auction 2023 and check out  IPL 2023 and Live Cricket Score. Like us on Facebook or follow us on Twitter for more sports updates. You can also download the NDTV Cricket app for Android or iOS.