Watch: Adelaide Strikers Skipper Alex Carey Throws Himself In The Air To Pull Off A Stunning Catch In BBL 2020

BBL 2020: Adelaide Strikers captain Alex Carey stretched himself in the air before catching the ball in his glove-webbing to dismiss Liam Livingstone. 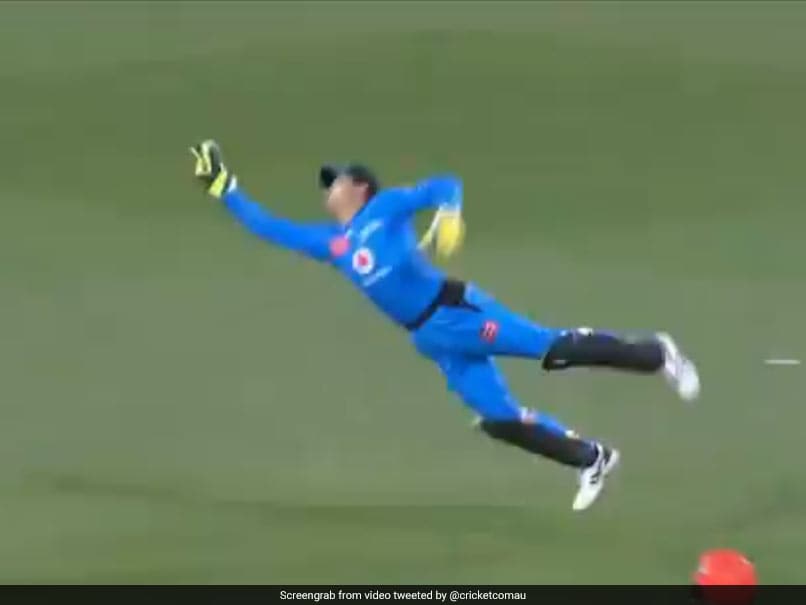 BBL 2020: Alex Carey dived to his right to pull off a sensational catch during a BBL game.© Twitter

Adelaide Strikers skipper Alex Carey, after leading his side from front with the bat, pulled off a brilliant catch, diving to his right at full stretch during a Big Bash League (BBL) match at the Adelaide Ovalon Thursday. Perth Scorchers were cruising in their run chase having scored 53 runs from first seven overs. However, Wes Agar struck twice in the eight over of the innings to give his side a glimmer of hope. He first dismissed dangerous Jason Roy for 49 runs on the second ball of the over and a ball later Carey's brilliant catchbehind stumps helped him get rid of the other opener Liam Livingstone, who fell cheaply for eight runs. Agar bowled a short-of-length delivery close to Livingstone's body. Taken by surprise with the extra bounce, the batsman tried to steer it  down to third-man but hit it too close to the wicket-keeper who stretched himself in the air before catching the ball in his glove-webbing.

Defending a modest total, Agar wasn't as economical as he would have liked, finishing his four-over spell with the figures of 2/43.

Before pulling off the remarkable catch, Carey played a captain's knock, smashing 82 off just 59 balls, as his side finished with 146/9 in their 20 overs.

While Carey held crease from one end, no other batsmen could lend him any support from the other end as Adelaide Strikers kept losing wickets at regular intervals. Besides Carey, the second top-scorer for Strikers was Matt Renshaw with 19 runs.

Josh Inglis (44* off 31 balls) and Mitchell Marsh (38* off 34 balls) stitched a solid partnership as Perth Scorchers beat Adelaide Strikers by seven wickets, with more than two over left.

Jhye Richardson, who picked up three wickets for 19 runs from his four overs, was awarded the Player of the Match.

Adelaide Oval, Adelaide Cricket
Get the latest updates on ICC Women's Cricket World Cup 2022 and IPL 2022, check out the Schedule , Live Score and IPL Points Table. Like us on Facebook or follow us on Twitter for more sports updates. You can also download the NDTV Cricket app for Android or iOS.