Alex Carey will spend the next four years with the Adelaide Strikers in the Big Bash League. 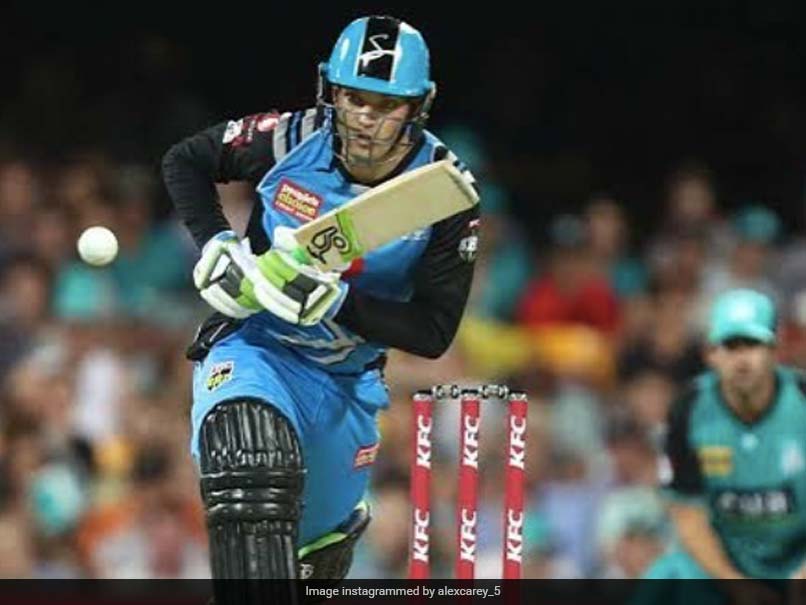 Alex Carey has been with the Adelaide Strikers since 2017.© Instagram

Australian wicketkeeper-batsman Alex Carey will remain with the Adelaide Strikers for the next four years, completing the squad for the upcoming edition of the Big Bash League (BBL), the club announced on Monday. The 29-year-old first joined the Strikers in 2017 ahead of BBL season six, and already sits third on the run-scorer tally with 1,163 runs from his 35 matches played, including one century and six half-centuries. The classy gloveman is also top of the pile for Strikers dismissals, with 37, featuring 33 catches and four stumpings.

"I'm very happy to be staying at the Strikers for the next four years being my home team and it is an unbelievable feeling playing at Adelaide Oval in front of the fans, family, and friends, and I really hope that can continue this season," Carey said in an official statement.

"The Big Bash is a competition I have loved playing in each year since I first signed, and I can't wait for it all to get started," he added.

Carey will first take the gloves in Australia's ODI and T20I series against India beginning 27 November, and it is expected he will link up with the Strikers through December.

"Alex is a key part of the group, a player and leader of the highest standard, and for him to be at the Strikers for the next four years is a massive result for this franchise, the city, and our fans," said Head Coach Jason Gillespie.

A member of the Strikers' maiden Championship team in BBL season seven, Carey's one BBL century to date came against the Hobart Hurricanes that season, needing just 56 balls to complete the milestone at Adelaide Oval.

Alex Carey Cricket
Get the latest updates on IPL Auction 2023 and check out  IPL 2023 and Live Cricket Score. Like us on Facebook or follow us on Twitter for more sports updates. You can also download the NDTV Cricket app for Android or iOS.