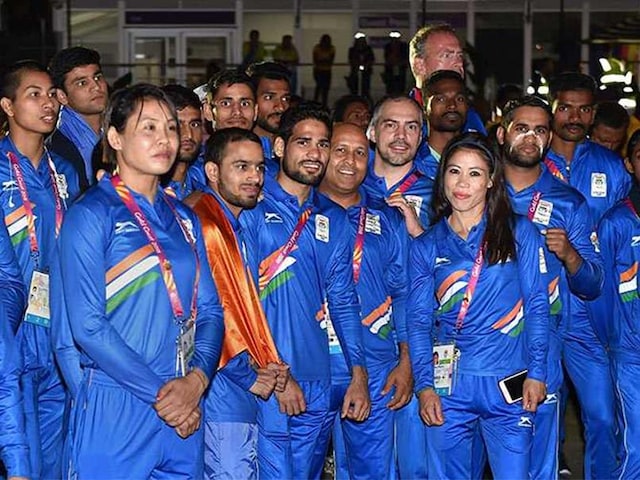 Indian contingent with officials at the flag hoisting ceremony© Twitter

India will aim to showcase its status as a rising sports power with an expected rich medal haul when the 21st Commonwealth Games begin on Wednesday. With a massive 222-member contingent, India look to better their previous CWG medal haul. India had collected 64 medals (15 gold, 30 silver, 19 bronze) in the previous CWG held in Glasgow and the country will expect to better that performance at Gold Coast. Getting 101 medals in the New Delhi remains a tipping point for India in the CWG but since that took place at home, that mark will be lofty for the Indian contingent. The bulk of India's medals in the past editions of the CWG have come from shooters, wrestlers, weightlifters and boxers and this time competitors under these four disciplines will look to continue their impressive record.

After them, disciplines like squash, badminton and athletics will look to get to the top of the podium. Moreover, surprising performances in gymnastics and cycling are also expected.

In athletics, among the 28 competitors, star javelin thrower and Asian champion Neeraj Chopra and 2014 Games' silver medal-winning discus thrower Seema Punia have proved to be counted as confident medal hopefuls. Three-time CWG medal-winning discus thrower Seema Antil will need to again prove that she still has the hunger and power to earn India a medal here. M.R. Poovamma, Jauna Murmu and Hima Das and Sonia Baishya -- part of 4X400m relay team -- will need to pull of their very best to get a place on the podium.

India also has high hopes from the badminton team, which includes Olympic medallists Saina Nehwal and P.V. Sindhu. In the men's singles, Kidambi Srikanth and H.S. Prannoy are also medal prospects. In the mixed team event, India had failed in Glasgow and this time, riding on the singles superstars, India will aim for a podium finish.

India's men's hockey team won two silver medals in the past two CWGs, losing to Australia in the finals, and this time, the reigning Asian champions will aim to bag the yellow metal. The women's team which competed in the 2010 and 2014 without medals, will have a strong chance to finish on the podium.

In squash, expectations will be high on Joshana Chinappa, Dipika Pallikal Karthik, Saurav Ghosal and Harinder Pal Sandhu. Dipika and Joshana will look to defend their doubles title.

In table tennis, Achanta Sharath Kamala will lead the Indian campaign. This Indian squad has already been hit by the ban on Soumyajit Ghosh, who is facing allegations of rape in Bengal. Harmeet Desai, Sanil Shetty, G. Sathiyan, Manika Batra, Mouma Das and Pooja Sahasreebudhe will compete in the singles, doubles and the team events.

In cycling, the pairing of Deborah Herold and Allena Reji is expected to bring a medal in the women's time trial.

In gymnastics, India has shown in the past few years that it can throw surprises in the big events like Dipa Karmakar in the Olympics and Aruna Budda Reddy in World Cup 2018. Though Dipa won't be at the Gold Coast due to a knee injury, Aruna will aim to continue her rise to fame which started since the day she won a medal at the World Cup. 2010 surprising medallist Ashish Kumar is also there but in recent times, he has faded away and needs to rise to the occassion in his bid to get a medal here.

Comments
Topics mentioned in this article
CWG 2018 Saina Nehwal Mary Kom Badminton
Get the latest Cricket news, check out the India cricket schedule, Cricket live score . Like us on Facebook or follow us on Twitter for more sports updates. You can also download the NDTV Cricket app for Android or iOS.