2018 CWG, Highlights: India ended its campaign in Gold Coast with a total of 66 medals (26 Gold, 20 Silver, 20 Bronze). This is India's third most successful Commonwealth Games. 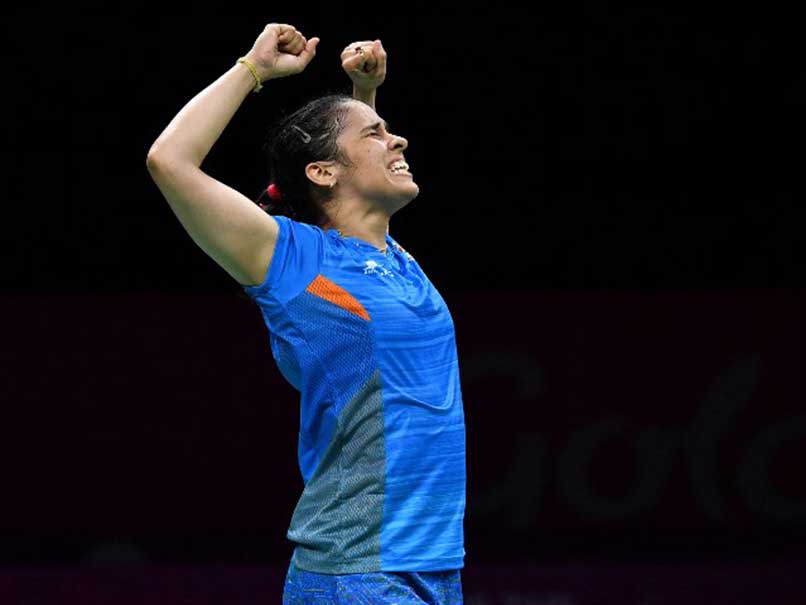 Indian star Saina Nehwal defeated compatriot PV Sindhu in straight games to win the women's singles title in the badminton competition at the 21st Commonwealth Games. Saina displayed some superb form to clinch a 21-18, 23-21 victory in the final. Saina was fired up and played with power and aggression to put Sindhu under pressure right from the start. Sindhu on the other hand, struggled to match her compatriot although she gave a stiff fight in the second game. Sindhu struggled with her placements during the opening game, her best shot being a well-placed one into the left corner of Saina's side of the court at 9-12. Saina had forced the lead right at the start of the first game and continued to increase the advantage at a steady pace. A superb drop shot gave Saina a 19-15 lead before Sindhu fought back to reduce the gap. But Sindhu's poor accuracy let her down once again as she fired an attempted return into the net to give Saina the first game. The second game was a totally different story as Sindhu picked up the tempo. Saina had taken the early lead in the second game as well before she fired one wide to allow Sindhu to draw level at 4-4. Sindhu took two back to back points take a 6-4 lead before Saina reduced the gap with a deceptive smash that totally outfoxed her rival. Sindhu however, and continued to pick up the points bolster her advantage despite excellent play by Saina. Saina continued to fight hard, attempting to chip away at the deficit. Sindhu managed to hold on to the lead for a long time. But the constant pressure by Saina finally paid off when she drew level at 19-19.  A long rally saw Sindhu retake the lead at 20-19 before she hit one long as Saina drew level once again. Another long rally followed by yet another long hit by Sindhu saw Saina reach game and match point at 21-20. But Sindhu was not to be so easily defeated. She drew level once again with some excellent net play before Saina toook the lead once again with a well placed smash. Saina's patience and fighting spirit finally paid off as an under pressure Sindhu faltered at the net to hit one wide to hand her opponent the gold. Newly-crowned World No.1 Kidambi Srikanth let slip the early advantage to settle for a silver medal, going down to Malaysian legend Lee Chong Wei in the men's singles summit clash. Srikanth had beaten Lee in the mixed team championships final earlier in the Games but the former world number one rallied for a 19-21 21-14 21-14 triumph today for his third individual CWG gold. He has two more mixed team gold medals to his credit. A decade older than the Indian, Lee kept his best for the last, showing off the legendary reflexes that have earned him cult status in international badminton. Defending champions Dipika Pallikal and Joshna Chinappa settled for the silver in women's doubles squash, after losing to New Zealand's Joelle King and Amanda Landers-Murphy. The Indian duo lost 0-2 (9-11, 8-11) to the Kiwis in the pulsating 22-minute summit clash at the Oxenford Studios. Joshna and Dipika, who lifted the gold in Glasgow, failed to match the intensity of their opponents in Sunday's summit clash. After comfortably pocketing the opening game, the New Zealanders continued to dominate in the second as the Indian pair struggled to get back and eventually finish on the losing side. (MEDALS TALLY)

12:50 IST: Thank you for joining our Live coverage of 2018 Commonwealth Games in Gold Coast. 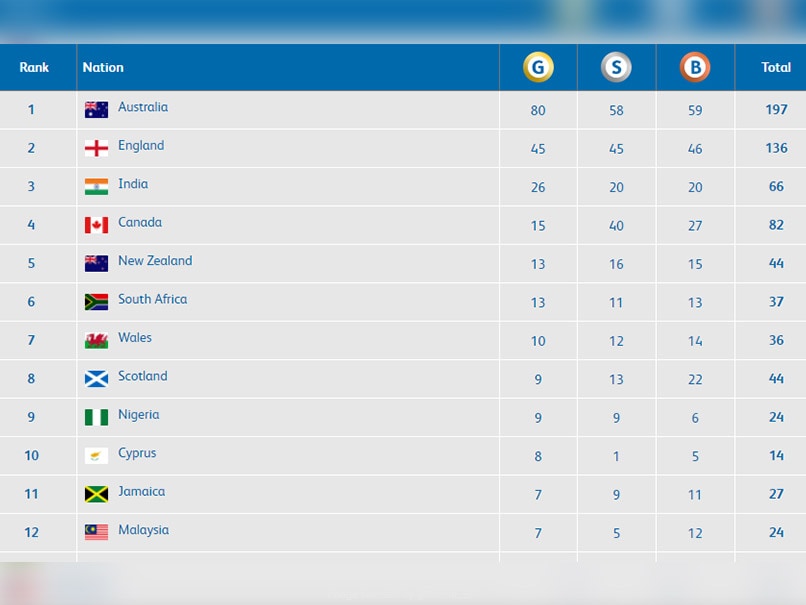 All thanks to the efforts and hard work put in by our wonderful #Athletes & support staff. Billions back home are proud of our #GC2018 #CommonwealthGames #Champions

We'll see you soon for the Closing ceremony at 3pm in #CarraraStadium!#SHARETHEDREAM pic.twitter.com/nDETaFXCpv

Congratulations to @WrestlerSushil and Rahul Aware for the gold in wrestling. Wonderful performance. Feel very proud of the performances of our athletes #GC2018Wrestling pic.twitter.com/Hbu9HqN0fV

Congratulations to @NSaina and @Pvsindhu1 for amazing performances. The whole country was expecting nothing but a Gold and a Silver and you delivered with an amazing show. Congratulations!!

What a proud feeling to be around the athletes who've made proud every day with their blood & sweat! #GC2018 #IndiaAtCWG #CWG2018 pic.twitter.com/TVh92vGDHF

10:10 IST: A superb rally but England take the point in the end. The English pair are two points away from winning the first game.

10:01 IST: Back-to-back points for Satwik Rankireddy and Chandrashekhar Shetty. They still trail 4-6 against the England pair.

09:54 IST: All the players have arrived. And, India's final Gold Coast appearance begins.

08:03 IST: What a domination from the Malaysian shuttler. He takes 7-1 lead in the gold medal decider.

08:01 IST: The third and final game gets underway.

07:42 IST: What a comeback from Kidambi Srikanth. He wins three back-to-back points to take 7-5 lead.

07:21 IST:Three back-to-back points for Kidambi. He takes 9-7 lead against Lee Chong Wei in the opening game.

07:20 IST: Kidambi Srikanth fights back to make it 7-7 in the opening game in men's singles gold medal match.

07:17 IST: Fourth consecutive point for Kidambi. He trails 5-4 in the opening game.

07:14 IST: Dominating start by Lee Chong Wei. Three back-to-back points for him. He leads 3-0 in the opening game.

06:54 IST: After an epic clash between Saina and Sindhu, it's time for another high-octane battle - Kidambi Srikanth vs Lee Chong Wei.

Congratulations @NSaina on the Gold medal win and @Pvsindhu1 on the Silver. Both of you are pride of our nation #CWG2018 pic.twitter.com/267eptwm1k

56 Minutes, 2 Matches, some jaw dropping rallies and the Gold Medal to #SainaNehwal!

Great game @NSaina ! A well deserved Gold for you #Champion! Skills, Will power and execution of the highest order. Thank you for the entertainment. Well deserved. pic.twitter.com/FrSu6rlaoB

06:43 IST: Superb drop shot from Sindhu. Game point for her.

06:29 IST: Fans cheering after every point the two shuttlers scoring.

06:14 IST: The second game between Saina and Sindhu is underway. 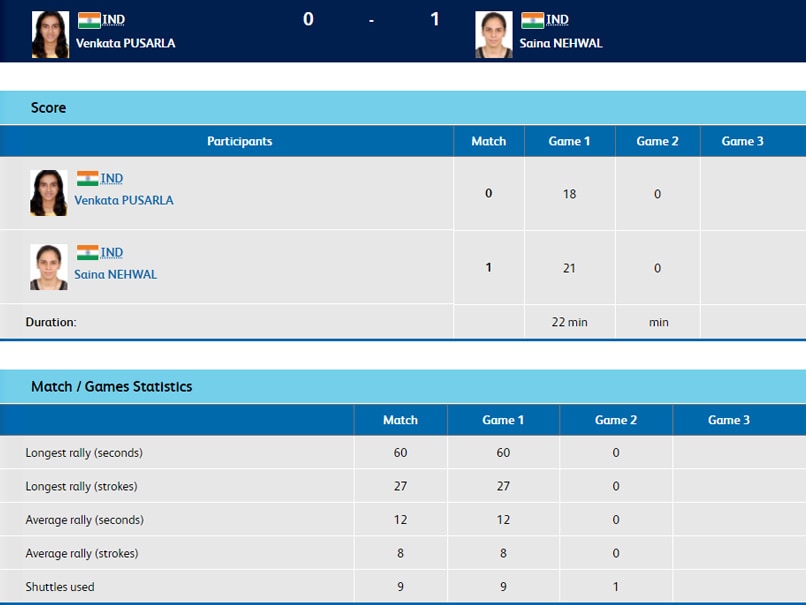 06:11 IST: Three back-to-back points for Sindhu. The Rio Olympics medallist makes it 18-20 in the opening game.

05:50 IST: It's time for the mouth-watering women's singles gold medal clash between Saina and Sindhu.

05:43 IST: Fans have lined up at Carrara stadium to cheer Saina Nehwal and PV Sindhu.

05:39 IST: Mary Kom will be the Flag bearer of India at the Closing Ceremony.

We are proud to announce that #MaryKom will be the Flag Bearer of #TeamIndia at the 'Closing Ceremony' of the #GC2018 #CommonwealthGames !

Final day of the #GC2018 #CommonwealthGames saw#ManikaBatra of #TeamIndia claim a fourth medal in #GC2018TableTennis by playing & defeating the pair of #SharathAchanta-#MoumaDas,3-0 in her Mixed Doubles Bronze Match with #SathiyanGnanasekaran !#Congratulations Champs pic.twitter.com/NlWrOjYM4k

04:55 IST: Hello and welcome to the Live coverage of the Commonwealth Games 2018 in Gold Coast.

From the boxing ring to the shooting range to the athletics arena, it was India shining on the penultimate day of the 21st Commonwealth Games where the country claimed its biggest single-day haul of the ongoing edition, ensnaring eight gold medals across five disciplines. The boxers picked up three, the shooters added one, the wrestlers claimed a couple, while the paddlers and the track-and-field contingent picked up one each on a truly golden day for the country, which also yielded five silver and one bronze medal. The country held on to the third position in the overall medal tally with 59 medals -- 25 gold, 16 silver and 18 bronze medals. It all started at the shooting ranges in Brisbane, where Sanjeev Rajput shattered the Games' qualifying record before finishing on top in the 50m rifle 3 position final. He had won a bronze (2006) and a silver (2014) in the earlier editions. The wrestlers were at it at the Carrara Sports and Leisure Center. Sumit (125kg) and Vinesh Phogat (50kg) picked up the top honours in their respective categories even as Olympic bronze-medallist Sakshi Malik (62kg) settled for a third-place finish, along with Somveer (86kg). At the boxing arena of the Oxenford Studios, MC Mary Kom (48kg) was joined by Vikas Krishan (75kg) and Gaurav Solanki (52kg) in scripting history. The boxers, led by three, finished with nine medals in all, their best ever performance, two better than the previous best attained at 2010 Delhi Games. While Mary Kom became the first Indian woman boxer to claim a CWG gold, Vikas became the first to have gold in both the Asian and Commonwealth Games.

Neeraj Chopra wrote his own little piece of history at the Carrara stadium when he became the first Indian javelin thrower to claim a gold medal. His gold was only the fifth for India in track and field. The 20-year-old destroyed competition with his very first throw of 85.50m before taking it a notch higher with a season's best effort of 86.47m. None in the field came close to his performance even though he himself seemed a shade disappointed on missing a personal best by "just one centimetre". Good news poured in from the TT venue of the Oxenford Studios where Manika Batra, in perhaps the form of her life, became the first woman paddler to claim a gold medal. Not to forget the silver-medallists, three of them coming from boxing in Manish Kaushik (60kg), Amit Panghal (49kg) and Satish Kumar.

Dipika Pallikal and Sourav Ghosal picked up the mixed doubles squash silver, while Sanil Shetty and Harmeet Desai claimed the second position in table tennis men's doubles. The lone bronze of the day was delivered by shuttlers N Sikki Reddy and Ashwini Ponnappa. The disappointments of the day were the two hockey teams, both of whom failed to secure medals, ending fourth after losing to England in their respective bronze-medal playoffs. It was an especially disappointing performance by the men, who had returned with silver medals in the past two editions.

Comments
Topics mentioned in this article
CWG 2018 India Wrestling Boxing Saina Nehwal PV Sindhu Kidambi Srikanth Live Blogs Other Sports
Get the latest updates on Fifa Worldcup 2022 and check out  Fifa World Cup Schedule, Stats and Live Cricket Score. Like us on Facebook or follow us on Twitter for more sports updates. You can also download the NDTV Cricket app for Android or iOS.