The match was reduced to 17 overs a side after rain caused interruption during the Australian innings. 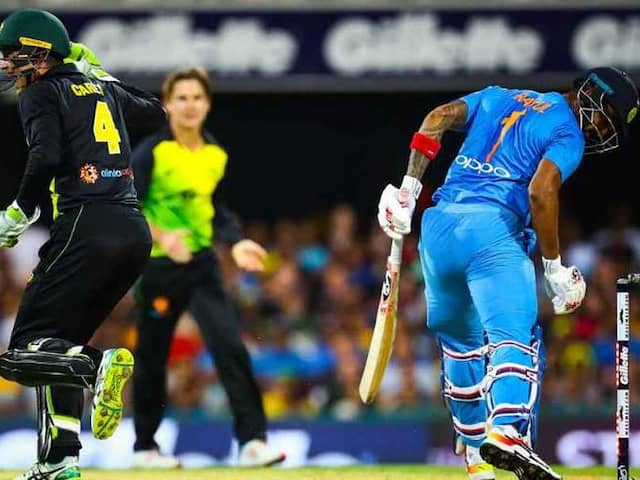 India lost the first T20I of the series against Australia by four runs.© AFP

India lost the T20I series opener against Australia by a narrow four-run margin at the Gabba in Brisbane on Wednesday. The rain interruption caused during Australian half of the thrilling encounter played a major spoilsport for the Indian team. Even after restricting Australia to 158 for four in 17 overs in the first innings, India ended up chasing of a revised target of 174 runs. With the rain causing stoppage for around 50 minutes, the Duckworth-Lewis-Stern method (DLS method) came into play and the 15 runs were added to the Australian total. Chasing the revised target for the men in blue could only muster 169 for seven in 17 overs. Pointing at match statistics, former India opener Virender Sehwag said that the runs added to the Australian team's total led to the loss for the Indian team. "India scoring more than Australia yet losing. Australia ke score par laga GST bhaari pad gaya. But a good thrilling game to start the series," Sehwag wrote on his official Twitter handle.

After winning the toss Indian skipper Virat Kohli opted to bowl against Australia in the series opener. India started brilliantly against the hosts but the suffered and onslaught from middle-order batsmen Glenn Maxwell (46) and Marcus Stoinis (33). Apart from Kuldeep Yadav (2-24) all the Indian bowlers were taken to the cleaners by the batting duo.

During the stiff run-chase, India got off to a poor start, losing Rohit Sharma (7) early in the innings. Shikhar Dhawan played a terrific 76-run knock but ran out of partners at the other end. Towards the end Dinesh Karthik (33) and Rishabh Pant (20) played handy knocks but failed to take the team across the line.

Australia currently lead the three-match T20I series 1-0. The second match of the series will be played at the Melbourne Cricket Ground on Friday.

Glenn Maxwell Australia vs India 2018/19 Cricket Australia vs India, 1st T20I
Get the latest Cricket news, check out the India cricket schedule, Cricket live score . Like us on Facebook or follow us on Twitter for more sports updates. You can also download the NDTV Cricket app for Android or iOS.