Virat Kohli however said that his pacers showed a dominating performance in the second innings. 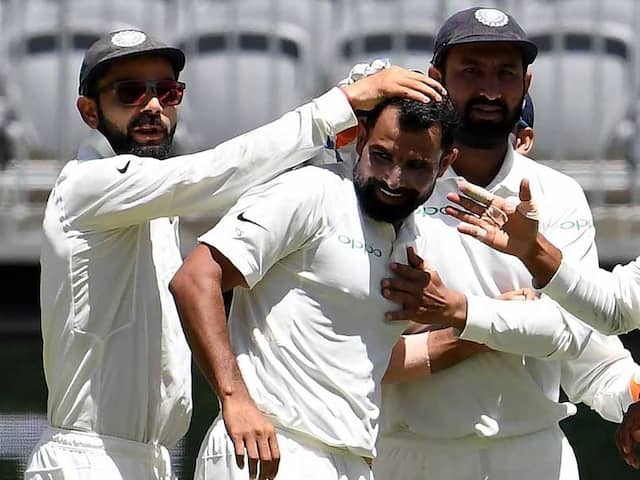 Virat Kohli opted to play with four seamers and no specialist spinner and paid a huge price for his selection by losing the second Test against Australia by 146 runs in Perth on Tuesday. Senior Indian pacer Ishant Sharma (4/41) and Mohammed Shami (6/56) bowled well for the hosts but it wasn't enough for India to win the second Test. However, Ravindra Jadeja, who was available for selection, was overlooked for Perth Test. Team India skipper Virat Kohli however, said that he thought going into the match with four quicks will be enough to win in Perth after the hosts had taken a 1-0 lead in the first Test.

"When we looked at the pitch, we didn't think about the (Ravindra) Jadeja option. We thought four quicks would be enough. Nathan Lyon bowled really well. We never thought about the spin option to be honest," Kohli said in the post-match interview.

In spite of the loss, the 30-year-old Kohli continued to back his pacers and said that it was really pleasing to see the way they dominated in the second innings.

"It was really pleasing to see the way our bowlers bowled relentlessly and dominated with the ball in the second innings," Kohli said.

With the 146-run win in Perth, skipper Tim Paine recorded his first win as Australia captain. It is also Australia's first victory in the longest format after the ball-tampering scandal broke out in March.

Kohli applauded Australia for their series-levelling victory and reckoned that his side would have liked to chase 30-40 runs less.

"As a team I think we played well in patches and that's something that we can hold on and take forward in the next game. Australia played better cricket than us and they deserved to win. Maybe we would have liked 30-40 less to chase," Kohli said.

Australia will next host India in the Boxing Day Test starting from December 26 at the Melbourne Cricket Ground (MCG).