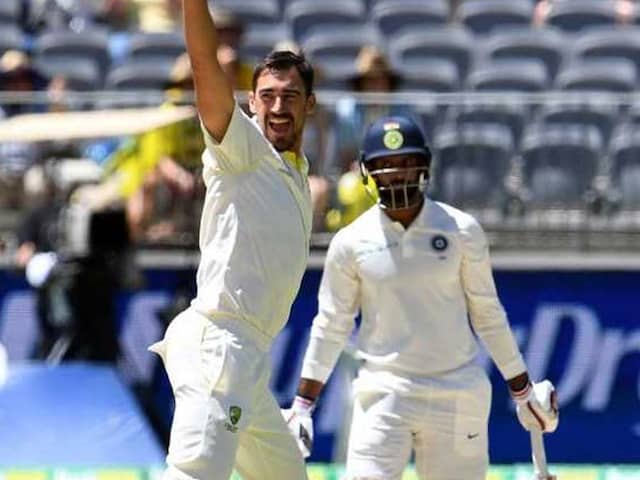 All-round Australia displayed a dominating performance to defeat India by 146 runs on Day 5 of the second Test and level series at 1-1. Resuming the day on India 113 for five, India lost Hanuma Vihari (28) to Mitchell Starc early. However, his fellow overnight batsman Rishabh Pant (30) continued to show some resistance and tackle the Australian bowlers before he was dismissed by Nathan Lyon. Later, Umesh Yadav (2), Ishant Sharma (0) and Jasprit Bumrah (0)  fell without troubling the scoreboard much. For Australia, Nathan Lyon and Mitchell Starc picked three-wicket hauls as India lost their way to a defeat. The Boxing Day Test will get underway from December 26 at the Melbourne Cricket Ground. (SCORECARD)

09:00 IST: Thank you for joining us on the live action from Day 5. We leave you with all the highlights from he day. Until next time, it's goodbye!

AUSSIES WIN! What a Test.

08:53 IST: WICKET! Ishant Sharma gets a feather touch from the delivery by Pat Cummins, hands an easy catch to Tim Paine behind the stumps. Australia just a wicket away from victory in Perth.

08:50 IST: Change of bowling for Australia, Pat Cummins have been brought into the attack. And he starts with a short ball to Ishant Sharma. Meantime, Mohammed Shami has joined Ishant in the middle.

08:47 IST: WICKET! Caught and bowled by Mitchell Starc, short of a length delivery, Umesh Yadav had no clue on how to play it, hands an easy catch to Starc. India 139 for eight.

08:45 IST: Double! Wayward shot from Umesh Yadav, did not see the delivery from Mitchell Starc properly but will take double to get off the mark.

08:39 IST: WICKET! Rishabh Pant went down the ground to hit Nathan Lyon over the top, did not get the elevation right. But what a catch from Peter Handscomb, that's a huge blow from India. India 137 for seven in 52.4 overs. Ishant Sharma is the new batsman in.

08:35 IST: Umesh Yadav takes a tumble on the crease, tried to go behind the short delivery by Mitchell Starc, drifting down the leg. Failed to keep his balance right!

08:28 IST: Short-pitched delivery from Mitchell Starc, luckily there was no fielder over the gully, two runs taken by Rishabh Pant. He retains strike.

08:24 IST: Rishabh Pant not looking to take a single, he clearly does not wants Umesh Yadav on strike. Plays the ball fine to third man, but no single taken!

08:23 IST: Beauty! Clever bowling by Nathan Lyon, using the rough patch on the pitch well, the ball ends up going away from the right-handed Umesh Yadav.

08:20 IST: Boundary! Rishabh Pant slashes hard on the delivery from Mitchell Starc, and the ball goes one bounce into the fence towards third man. India 128 for six.

08:17 IST: Double from Rishabh Pant, good running between the wickets. Just nudges it towards backward point to pick up two quick runs.

08:11 IST: WICKET! Extra bounce from Mitchell Starc does the trick early, Hanuma Vihari gets out through a soft dismissal, hands an easy catch to Marcus Harris at square leg. Umesh Yadav is the new batsman in.

08:04 IST: Not much swing on the ball from Mitchell Starc early on, but he bowls a beauty outside off stump to Rishabh Pant to end the over. India 116 for five.

07:50 IST: Hanuma Vihari and Rishabh Pant walk out in the centre. Nathan Lyon to bowl the first over. India 112 for five in 41 overs.

07:40 IST: Check out what Travis Head had to say before Day 5 resumes:

07:33 IST: Pitch report on Day 5 by Michael Vaughan: Plenty of footmarks there, cracks have opened up. Plenty for the seamers here.

07:28 IST: India need 175 more runs to win the match, while Australia will be eyeing the 5 remaining wickets to level the four-match Border-Gavaskar series.

07:27 IST: Hanuma Vihari showed a lot of patience on Day 4. Will he be able to continue with the same as the final day resumes?

07:15 IST: Hello and welcome to the live commentary from Day 5 of the India vs Australia second Test.

Jasprit Bumrah picked up three wickets, while Ishant Sharma dismissed Peter Handscomb (13) to join the party. India opener KL Rahul continued his poor outing as he lost his wicket for zero in the first over. He had managed to score just two runs in the previous innings. Cheteshwar Pujara (4), who was only batsman to score a century in the first Test that India won by 31 runs, joined Rahul back in pavilion inside first four over.

Captain Virat Kohli, who had scored a noteworthy 123-run knock in the first innings, couldn't help India much in the chase and lost his wicket for just 17 runs. Kohli edged a straight Nathan Lyon delivery to Usman Khawaja at slip for 17, sparking scenes of jubilation from the Australian players. The off-spinner claimed the India talisman for a record seventh time, the most by a bowler, and in his next over bowled Vijay for 20 off an inside edge. Lyon continued his stranglehold over India, continually troubling the batsmen by targeting the expansive rough patches.

Murali Vijay, the other opener who has failed to impress in the ongoing series, stood tall at the cease for a while but managed to contribute just 20 runs off 67 balls. Vice-captain Ajinkya Rahane, who scored a fifty in the first innings, tried to anchor Indian innings again but lost his wicket to Hazlewood for 30, just six overs before the stumps. The bowling onslaught has Australia on the cusp of snapping a barren six-Test run without a win and providing skipper Tim Paine with his first triumph as captain. Australia's bowlers regained firm control of the match after their batsmen had crumbled against quick Mohammed Shami in the middle session.

Josh Hazlewood Australia vs India 2018/19 Australia vs India, 2nd Test Cricket Live Score Live Cricket Score Live Blogs
Get the latest Cricket news, check out the India cricket schedule, Cricket live score . Like us on Facebook or follow us on Twitter for more sports updates. You can also download the NDTV Cricket app for Android or iOS.