Former India batter Gautam Gambhir was seen posing with the Sri Lankan flag and the entire supporters of Dasun Shanaka's side erupted in joy. 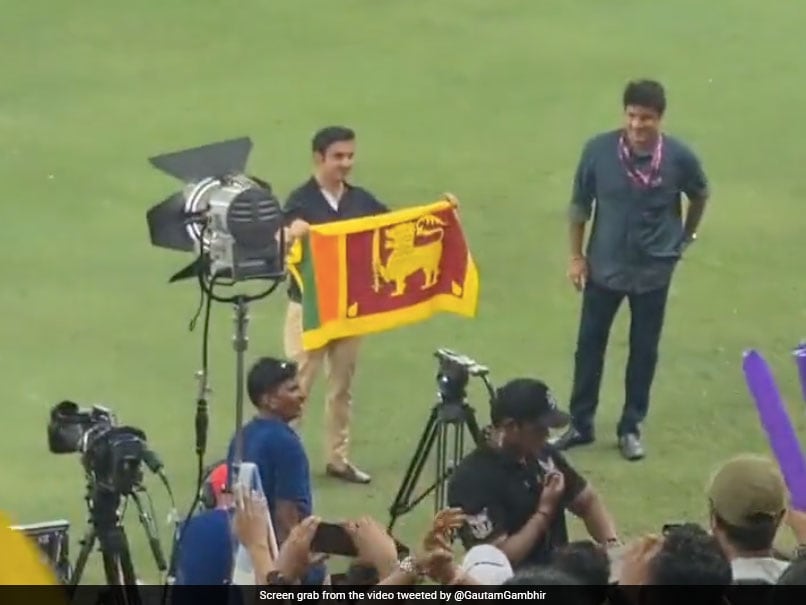 Sri Lanka came up with a performance of a lifetime as the side punched above its weight to win the Asia Cup 2022. The Dasun Shanaka-led side defeated Pakistan by 23 runs in the summit clash to win the Asia Cup for the sixth time. Sri Lanka displayed a perfect all-round performance to win the contest and it is important to remember that the side were reeling at 58/5 at one stage, but owing to Bhanuka Rajapaksa's knock of 71 runs, Sri Lanka posted 170/6 in 20 overs. Then, the side bundled out Pakistan for 147, winning the contest by 23 runs.

After the win, former India batter Gautam Gambhir was seen posing with the Sri Lankan flag and the entire supporters of Dasun Shanaka's side erupted in joy.

Gambhir shared a video of the incident on his Twitter account and he wrote: "Superstar team...Truly deserving!!#CongratsSriLanka."

Sri Lanka, a country picking up pieces after the death of democracy while facing enormous financial turbulence, found 11 worthy heroes on a cricket pitch as Dasun Shanaka's unheralded bunch crushed Pakistan by 23 runs to win their sixth Asia Cup title here on Sunday.

It was a victory that was just not about cricket but way beyond that with much deeper historical and political importance.

It was one for posterity as Sri Lanka first raised themselves from the dungeons to reach 170 for 6 from a hopeless 58 for 5 because of Bhanuka Rajapaksa's 45-ball-71, easily one of the best knocks under pressure in T20s in recent times.

If that wasn't enough, Pakistan, who were cruising along at 93 for 2, were finally bowled out Pakistan for 147 as pacer Pramod Madushan (4/34 in 4 overs) and leg-spinner Wanindu Hasaranga (3/27 in 4 overs) ensured that the few thousands of Sri Lankan fans out cheered the 20,000 odd Pakistan fans.

Gautam Gambhir Dasun Shanaka Asia Cup, 2022 Cricket
Get the latest updates on Fifa Worldcup 2022 and check out  Fifa World Cup Schedule, Stats and Live Cricket Score. Like us on Facebook or follow us on Twitter for more sports updates. You can also download the NDTV Cricket app for Android or iOS.