Krishnamachari Srikkanth accidently hit Hemang Badani with the bat while he was explaining a shot. 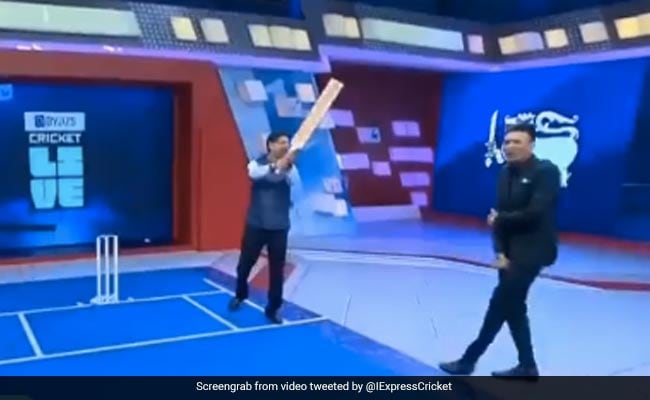 Hemang Badani reacts after suffering an accidental blow on elbow from Krishnamachari Srikkanth.

Former India cricketer Hemang Badani suffered an injury during an Asia Cup pre-match show on Saturday. In the opening match of the ongoing Asia Cup, Sri Lanka took on Afghanistan, and Badani, who was on air with Krishnamachari Srikkanth on Star Sports' Tamil feed, was hit with the bat by the former India opener while he was explaining a shot. Badani was visibly in pain and was seen rubbing his elbow. While Badani tried to work through pain, he eventually walked off the studio holding his elbow.

I am in terrible pain but luckily no fracture: Hemang Badani pic.twitter.com/uSx0Wduz1t

The 45-year-old, who played four Tests and 40 ODIs for Team India, took to Twitter on Saturday and provided an update regarding his elbow injury.

"To all enquiring how I am, I in terrible pain but luckily no fracture. Its blunt trauma and am under medication. Hope to recover soon and be back on the sets," Badani tweeted.

To all enquiring how I am, I in terrible pain but luckily no fracture. Its blunt trauma and am under medication . Hope to recover soon and be back on the sets .@StarSportsIndia @StarSportsTamil #AsiaCup #INDvPAK

Afghanistan hammered Sri Lanka by 8 wickets in the opening match of the Asia Cup.

After Aghanistan elected to bowl, left-arm pacer Fazalhaq Farooqi returned bowling figures of 3-11 as his side bowled out Sri Lanka for a meagre 105-run total.

In reply, Hazratullah Zazai, unbeaten on 37, and wicketkeeper-batsman Rahmanllah Gurbaz, who hit 40, put on 83 runs for the opening wicket to build on the dominance started by the bowlers.

In the end, Afghanistan chased down the target with 59 balls to spare.

Meanwhile, India defeated arch-rivals Pakistan in the second match of the tournament at the Dubai International Stadium by 6 wickets on Sunday.

Afghanistan Asia Cup, 2022 Krisnamachari Srikkanth Hemang Badani
Get the latest updates on IPL Auction 2023 and check out  IPL 2023 and Live Cricket Score. Like us on Facebook or follow us on Twitter for more sports updates. You can also download the NDTV Cricket app for Android or iOS.