India vs Pakistan: In pictures that have emerged from Dubai, fans of both India and Pakistan could be seen with their flags and banners, and in a few images, both sets of fans were seen standing and posing together. 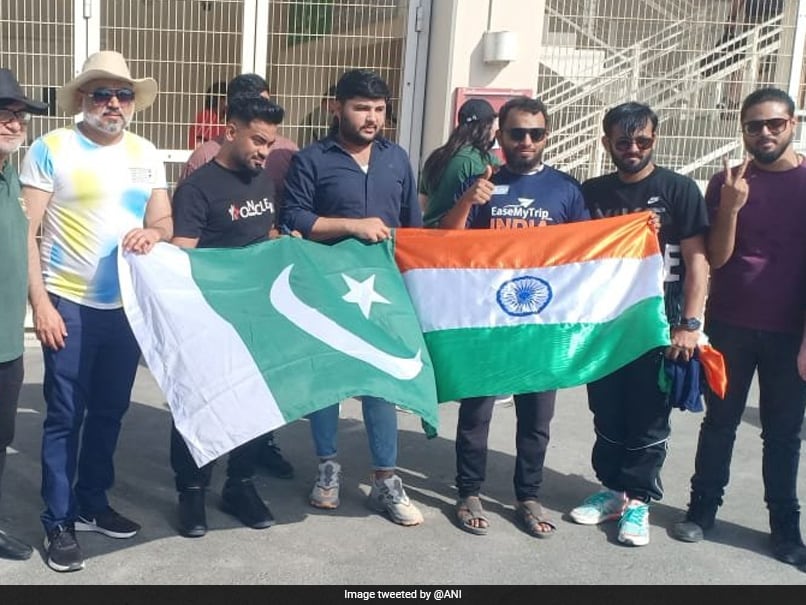 IND vs PAK: Picture of India and Pakistan fans outside the Dubai International Stadium.© Twitter

The match between arch-rivals India and Pakistan in the Asia Cup has been a highly-awaited affair for fans of both neighbouring nations. On Sunday, fans flocked to the Dubai International Stadium for the clash of the two giants of international cricket. In pictures that have emerged from Dubai, fans of both India and Pakistan could be seen with their flags and banners, and in a few images, both sets of fans were seen standing and posing together. Some fans came with a poster for India captain Rohit Sharma as well.

The match is the first time the two teams will meet since Pakistan beat India by 10 wickets at the same venue to register their first ever World Cup win over India last year.

It was also just the second time that Pakistan beat India in a T20I match.

Of the nine matches between the two sides, India have come out on top seven times.

All eyes will be on the contest between Virat Kohli and Babar Azam. While Kohli, one of the most prolific batters in the world, has come under scrutiny for an extended lean patch, Babar has been in imperious form across formats and is being touted by many to end up among the all-time greats.

Kohli is returning to the side after taking a month-long break.

Rohit Sharma won the toss and opted to field against Pakistan. India went with Dinesh Karthik ahead of Rishabh Pant.

India and Pakistan are in Group A in the Asia Cup, alongside Hong Kong.

The top two teams from each group will progress to the Super 4 stage, which will be played in a round-robin format. The two teams that finish on top in the Super 4 will play the final on September 11.

Pakistan Cricket Team Asia Cup, 2022
Get the latest updates on Fifa Worldcup 2022 and check out  Fifa World Cup Schedule, Stats and Live Cricket Score. Like us on Facebook or follow us on Twitter for more sports updates. You can also download the NDTV Cricket app for Android or iOS.