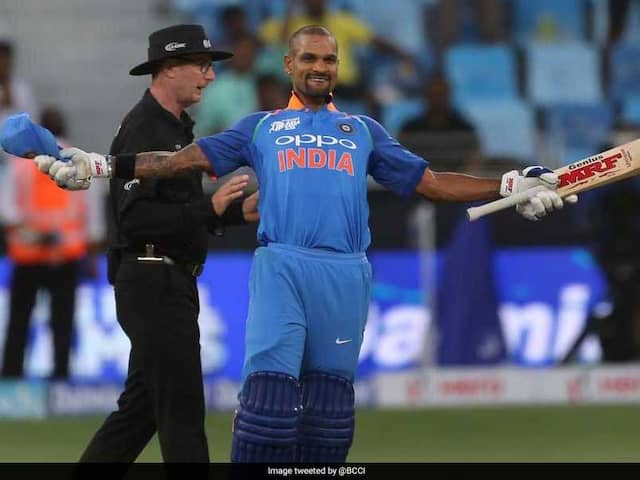 Shikhar Dhawan returned to form with a brilliant 127-run knock as India registered their first win of the 2018 Asia Cup by defeating Hong Kong by 26 runs at the Dubai International Cricket Stadium on Tuesday. Although a superb 174-run opening stand between Nizakat Khan and skipper Anshuman Rath created a bit of a panic in the Indian camp, the bowlers eventually managed to restrict Hong Kong to 259/7, avoiding a scary defeat against an associate cricketing nation. Debutant Khaleel Ahmed impressed with figures of 3/48 while spin duo of Yuzvendra Chahal and Kuldeep Yadav shared five wickets between themselves.

In pursuit of a stiff 286-run target, unheralded Hong Kong opening pair of Nizakat Khan (92) and skipper Anshuman Rath (73) provided the team with a brilliant start to raise the visions of a major upset. Nizakat and Rath's 174-run stand is the associate nation's highest partnership in ODI cricket.

This was after Shikhar Dhawan found his mojo in familiar flat tracks with lack of movement, helping himself to his 14th ODI century. Dhawan, who had a horrendous tour of England, cashed in on the chance against a weaker opposition on a low and slow continental pitch, smashing 127 off 120 balls as India scored 285 for seven after being asked to bat.

Dhawan hit as many as 15 boundaries and two sixes en route his century but India witnessed a mini batting collapse and failed to cross the 300-run mark against the unfancied bowling attack of Hong Kong.

Later, the Indian bowlers and fielders looked rusty till Nizakat and Rath were at the crease as the duo played with consummate ease to frustrate Rohit Sharma's men for close to 35 overs. But it was a known fact that India just needed one wicket to tilt the match in their favour as Hong Kong doesn't have the big stage experience and the breakthrough eventually came in the 35th over.

It took chinaman Kuldeep Yadav (2/42) to break the dangerous-looking partnership when Rath picked out Rohit at extra cover with a gentle drive. That was the trigger as Hong Kong lost the plot thereafter with another set batsman Nizakat departing in the next over, LBW to debutant Khaleel Ahmed.

The dismissals brought in two fresh batsmen at the crease and as expected it was never going to be easy for them to get going immediately on the slow pitch and it turned out to be so. Thereafter, the script penned out how India wanted as Yuzvendra Chahal (3/46), who looked ineffective early on, came to the party and picked up three wickets.

Earlier, together with comeback man Ambati Rayudu (60), Dhawan stitched 116 runs for the second wicket off 130 deliveries, to lay the foundation for India's total after the early dismissal of skipper Rohit (23).

Sent into bat, India lost Rohit with the scoreboard reading 45 in 7.4 overs but Dhawan and Rayudu joined hands to share a century stand during their chanceless knocks.

Returning to the side after clearing the YoYo test, Rayudu grabbed the opportunity with both hands and hit three boundaries and two sixes during his 70-ball knock. But just when it seemed the duo would take the opposition to the cleaners, Rayudu edged a Ehsan Nawaz bouncer to Scott McKechnie behind the stumps, trying an upper cut.

After the end of Dhawan-Rayudu partnership, the Indian batsmen found the going tough against slow bowlers of Hong Kong, on a relatively slow pitch, where shot making is not easy for a new batsman. Dhawan and next man Dinesh Karthik (33) then shared 79 runs for the third wicket to take the side forward before Hong Kong picked up three quick wickets to put brakes on India's scoring rate.

Dhawan himself wasted a golden opportunity to score a big hundred, holing out to Tanwir Afzal off off-spinner Kinchit Shah's (3/39) bowling in the 41st over.

Talismanic Mahendra Singh Dhoni's stay at the crease was limited to three deliveries as he failed to gauge the slowness of the pitch and edged one to McKechnie off off-spinner Ehsan Khan (2/65) in the next over.

As if that was not enough, Karthik too gave away his wicket while trying to go for a big shot on a slow wicket, caught at deep mid-wicket to Babar Hayat off Shah.

Towards the end, Kedar Jadhav made a 27-ball 28 but he too found shot-making difficult because of the slow nature of the pitch. In fact, Hong Kong bowled brilliantly in the last 10 overs as India scored just 48 runs losing five wickets.

MS Dhoni Khaleel Ahmed Dubai International Cricket Stadium, Dubai Asia Cup 2018 India vs Hong Kong, Match 4 Cricket
Get the latest Cricket news, check out the India cricket schedule, Cricket live score . Like us on Facebook or follow us on Twitter for more sports updates. You can also download the NDTV Cricket app for Android or iOS.