Shikhar Dhawan injured his thumb during the World Cup 2019 match with Australia, will be out of action for three weeks. 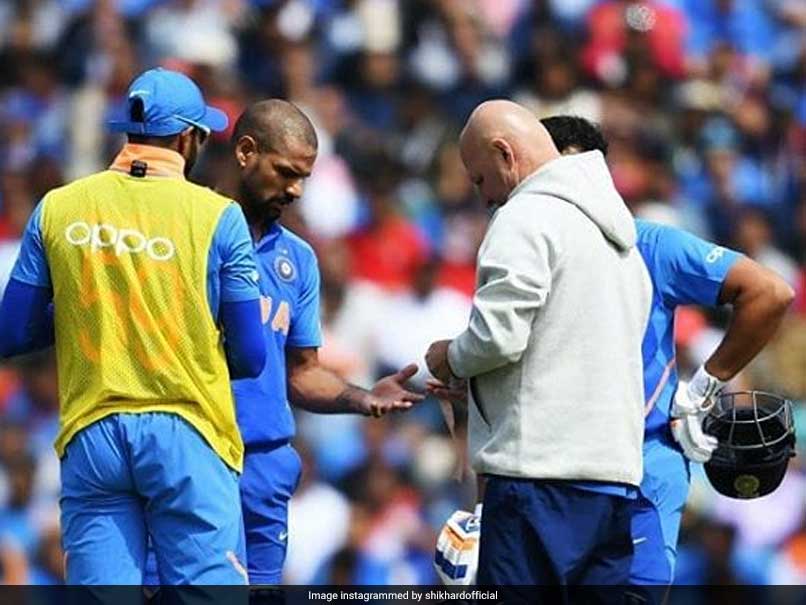 Shikhar Dhawan is under the observation of the medical team of the BCCI.© Instagram

Shikhar Dhawan suffered a thumb injury during his century knock in India's 36-run win against Australia at Kennington Oval on Saturday. While the team management, fans and critics are busy finding a suitable replacement for the left-handed opener, Shikhar Dhawan came up with a motivational poem written by Indian poet Rahat Indori. The poem captioned the pictures in Instagram of Shikhar Dhawan receiving treatment from Team India physio Patrick Farhart. The post lifted up the mood of the fans within no time, with many wishing him a speedy recovery.

Dhawan is under the observation of the medical team of the Board of Control for Cricket In India (BCCI) and will remain with the Indian team in England.

Young wicketkeeper-batsman Rishabh Pant was brought in as cover for the injured batsman on Wednesday. His arrival will be a day before India's game against New Zealand and he won't be considered a replacement till the time the team management takes a final call on Dhawan's availability for the rest of the tournament.

"Rishabh Pant is being flown in from India as cover at the request of the team management," a senior BCCI official currently in England told PTI.

Dhawan has been ruled out of three matches due to a hairline fracture on his left thumb which he sustained during his match-winning hundred in the clash against Australia on Sunday.

"...Dhawan is presently under the observation of the BCCI medical team. The team management has decided that Dhawan will continue to be in England and his progress will be monitored," the Indian team said in a statement on Wednesday night.

"Dhawan sustained an injury on the back of his left hand in the region between the index finger and thumb...," it added.

Shikhar Dhawan Rishabh Pant World Cup 2019 Cricket India vs Australia, Match 14
Get the latest updates on IPL Auction 2023 and check out  IPL 2023 and Live Cricket Score. Like us on Facebook or follow us on Twitter for more sports updates. You can also download the NDTV Cricket app for Android or iOS.